With decades of experience under her dive belt, Diana Hollingshead is no stranger to the challenges of scientific diving or the discoveries they can bring to the surface. Join us as we talk with this SCUBA instructor, as she reflects on her experiences as a volunteer scientific diver participating in marine reserve monitoring SCUBA surveys and shares what she brings and gets out of these underwater missions.

Diana Hollingshead has scarcely received notice from the ODFW Marine Reserves Program that the scientific dive surveys she volunteers for are being postponed due to the COVID-19 pandemic when she responds to my email requesting an interview to discuss her volunteer experiences with the program.

“Absolutely,” she replies enthusiastically, “If we can’t be in the water, let’s talk about diving!” 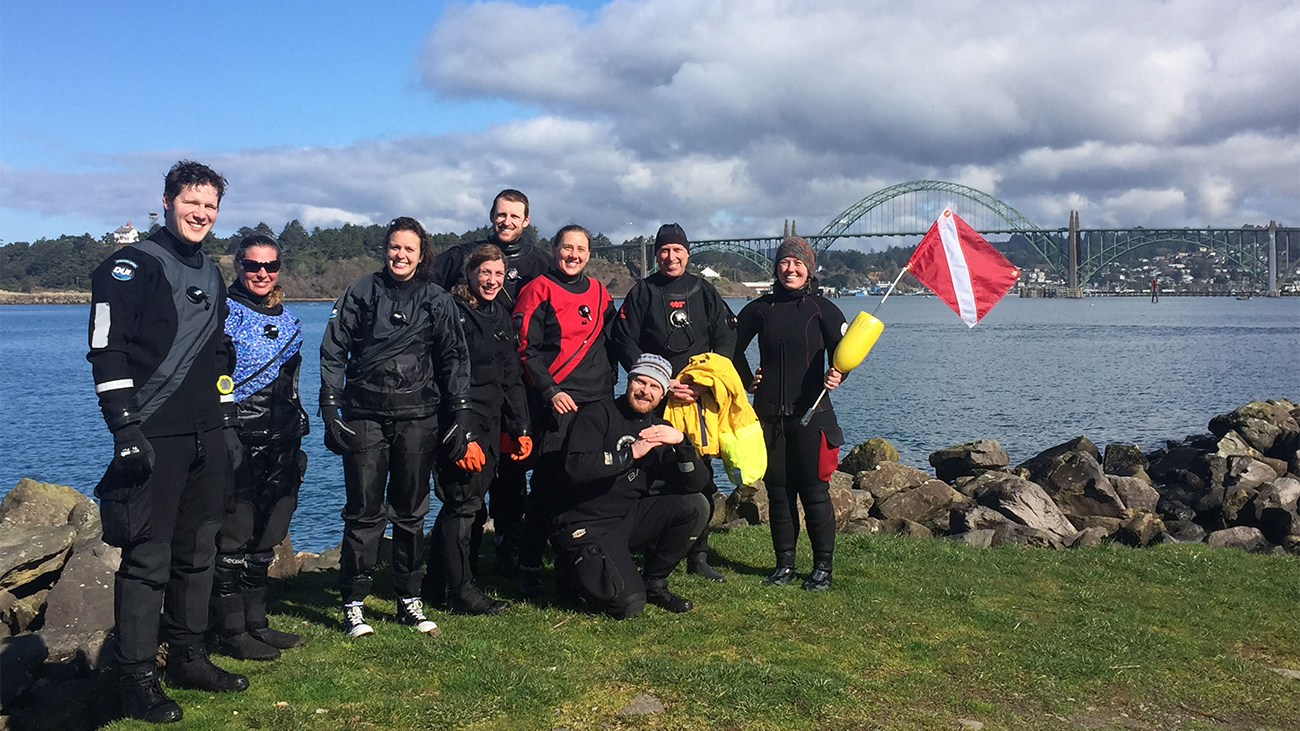 Photo: Diana Hollingshead (second from left) poses with her fellow volunteer scientific divers after a training exercise at the Yaquina Bay South Jetty in 2017

The Eugene resident was reached by phone to discuss her unwavering service in the small army of volunteers that enlist their time, energy, and expertise to help power the research and long-term monitoring occurring at Oregon’s marine reserve sites.

Hollingshead is part of the covert operations that brave Oregon’s cold and murky waters, plunging beneath the surface to carry out SCUBA surveys. These surveys are conducted in shallow rocky reef areas inside of the reserves, and in comparison areas outside of the reserves, to monitor and track changes in macroalgae (seaweeds), invertebrate, and fish communities.

These encounters with Oregon’s nearshore species are from a vantage point not experienced by many Oregonians, and Hollingshead is no stranger to the challenges of safely and accurately acquiring these data. 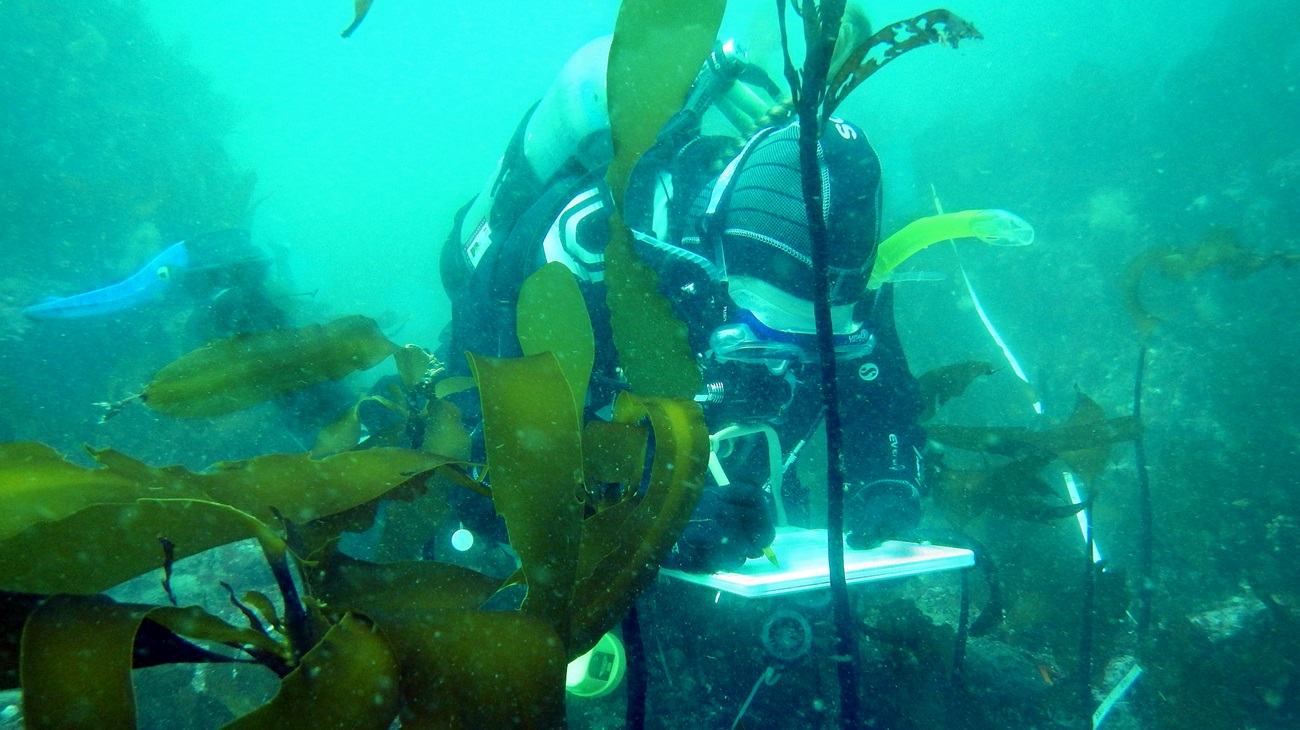 “I’ve had some absolutely amazing dives and I’ve had some dives where we drop down to the bottom and say ‘yeah, no, this isn’t happening because of visibility, and we abort the dive and turn around and head right back to the surface,” she says.

Hollingshead has participated in SCUBA surveys at the Otter Rock, Cascade Head, and Redfish Rocks marine reserves, and is eager to add Cape Falcon to her list once fieldwork can safely resume. Her involvement dates back to when these sites were first being established as areas for conservation and serving as scientific proving grounds for developing innovative nearshore monitoring methods.

In 2010-11, when the ODFW Marine Reserves Program was first spinning up the ecological monitoring program, scientists who’d been conducting ongoing SCUBA surveys to monitor kelp forests in California since 1999 came to lend a hand.

“When the PISCO team came out from California and started training us on how to do the surveys,” she says of the survey methods adapted from the Partnership for Interdisciplinary Studies of Coastal Oceans (PISCO), “I was part of the initial group, and so I have been with the program since it started.” 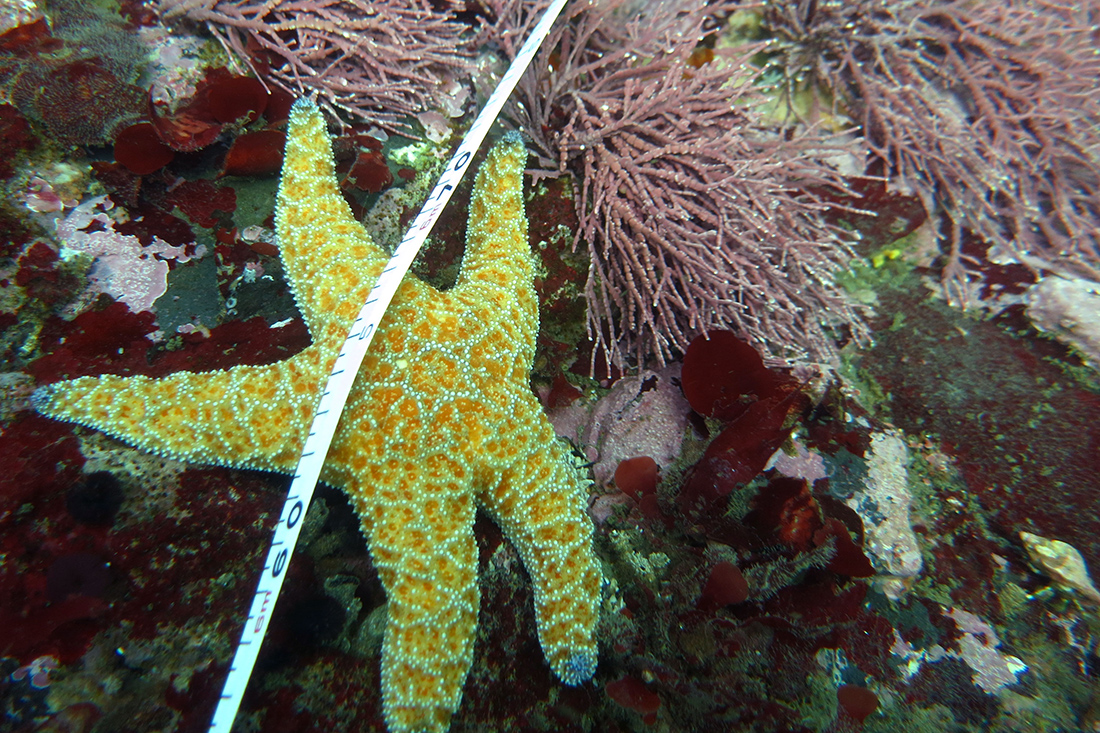 In the beginning, Hollingshead was called based on her background and connections. Not only does she have an AAUS scientific diver certification and extensive experience as a diver, but she’s also a certified SCUBA instructor at her family-owned Eugene Skin Divers Supply and earned a degree in marine biology from the University of Oregon.

At the time she’d been putting her skills and experience to work as a volunteer diver at the Oregon Coast Aquarium. Along with Oregon State University, the Aquarium is a key partner in helping lead the marine reserve monitoring SCUBA surveys. The Aquarium staff develop the dive plans and oversee safety under the direction of Assistant Dive Safety Officer, Doug Batson, and Dive Safety Officer, Jenna Walker. Hollingshead’s trust for the Aquarium’s safety protocols and diver education resources are central to her involvement.

“It was natural,” she says of pairing her technical and scientific skills and applying them to the monitoring SCUBA surveys, “they fit together perfectly. I love to dive and so it gave me an opportunity to volunteer for ODFW and see how quantities are changing and what species are changing and how range extensions are happening, what is considered an anomaly or what is just considered normal now. It has been interesting to see over the period of time.” 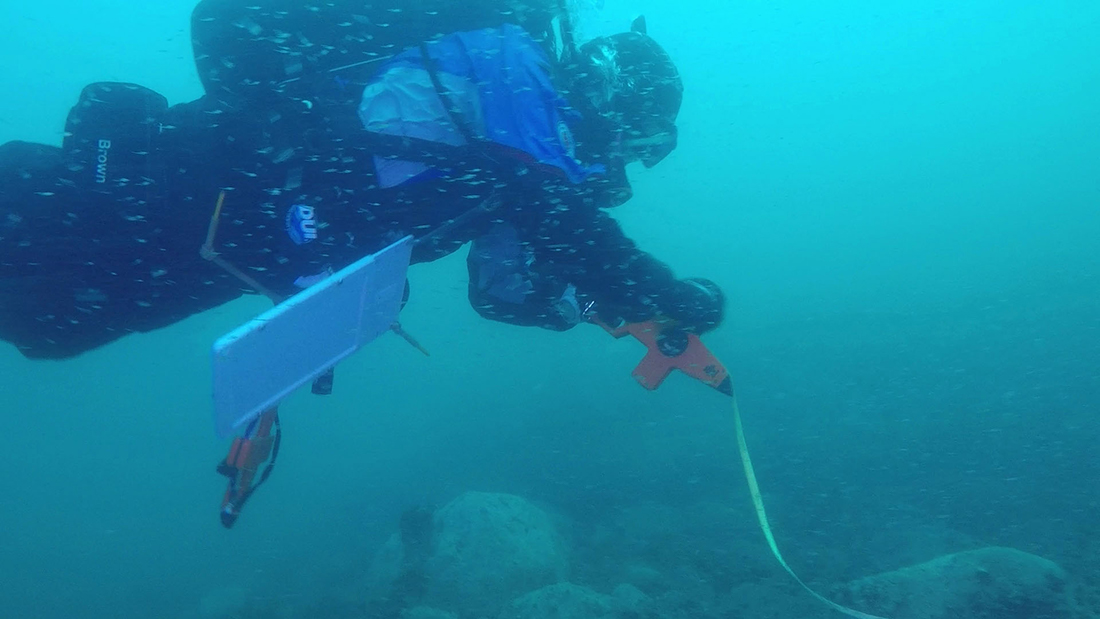 Photo: A diver runs out tape to determine the transect, or the 30 meter path along which they will document the various species that appear within the area.

Changes Hollingshead has witnessed first-hand include an increase of fish species more typical of California now being seen more frequently in Oregon waters, and the “decimation of kelp forests and overabundance of urchins,” she says. The latter is a documented phenomenon that has been receiving a lot of attention recently in large part due to observations and documentation stemming from long-term monitoring surveys, such as the marine reserve monitoring SCUBA surveys.

Through her years of experience from both recreational and scientific pursuits, Hollingshead has practiced and refined the skills required to meet the tests of Oregon’s nearshore ocean. On top of accurately identifying species once underwater, diving in their cold and often turbulent waters, as she puts it, “requires a lot of stuff.” 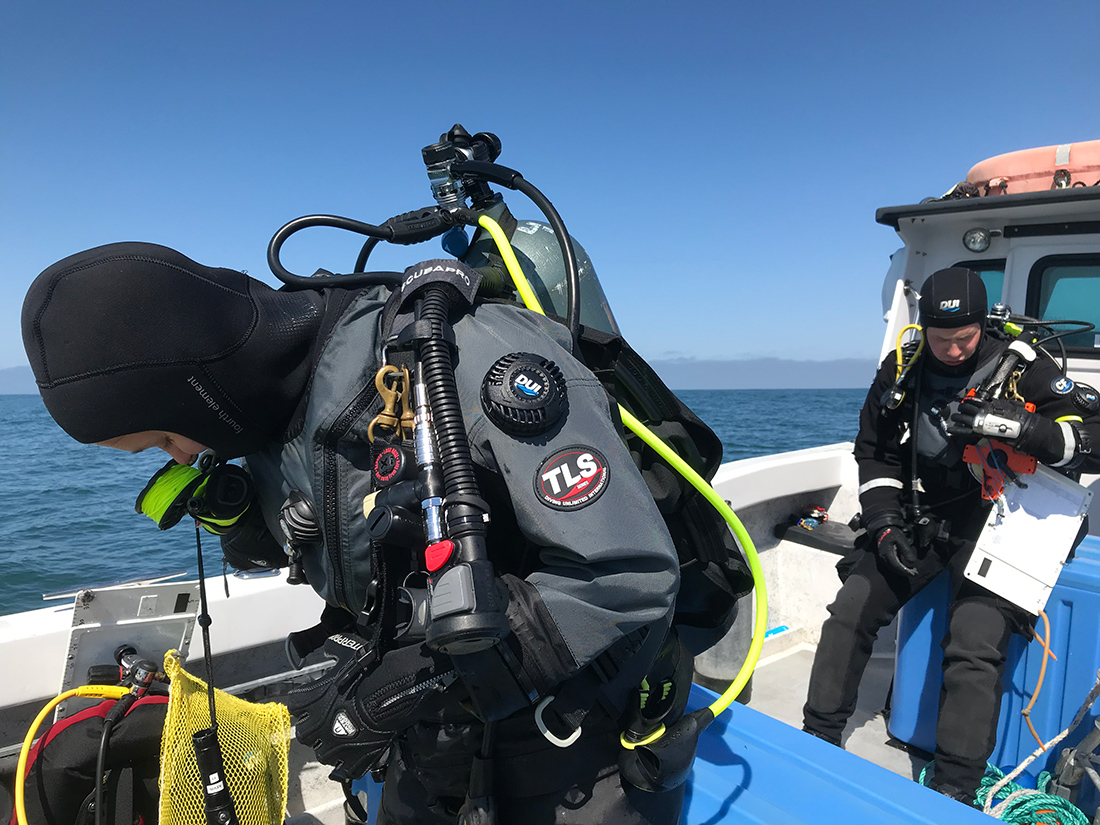 “Diving in warm water, you don’t have all the weight and all the bulk,” Hollingshead says of the tactical uniform required to dive in Oregon’s nearshore waters, “you’re not encased in a dry suit or rubber.”

Hollingshead’s experience and certification as a SCUBA instructor helps ensure that she and her fellow divers are not only properly suited with the appropriate extra gear and have the special annual diver training under their belts, but are also comfortable with their surroundings and their dive partner. 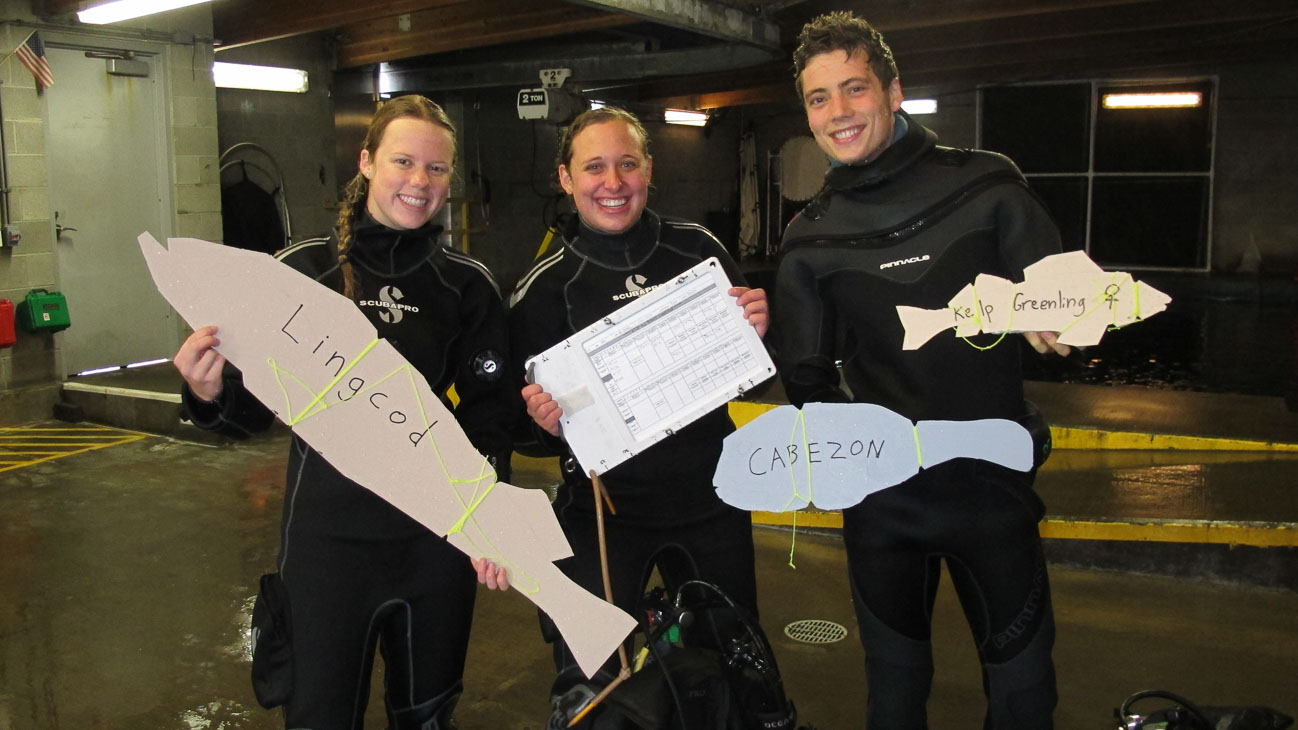 Photo: Divers pose with silhouettes of various fish species during an identification and sizing training session. This low-stress practice helps ensure accuracy and safety when surveys are conducted in the field.

“Being an instructor, I have a lot of experience with multi-level experience people,” she says, “so if someone is brand new, and it’s their first time diving on a boat, I’m very comfortable diving with them as a buddy.” It’s an invaluable sense of security, especially for the new recruits who join the ranks of volunteer scientific divers each year. “There are some new people who make it out every year, and it’s great to have new people coming into the program,” says Hollingshead.

Connecting with these comrades she mentions, is one of the most memorable parts of her volunteer service. “It’s great to be part of a team,” she says of the camaraderie that has developed among this army of divers, “and the teams work really well together. That’s been a fantastic experience.” 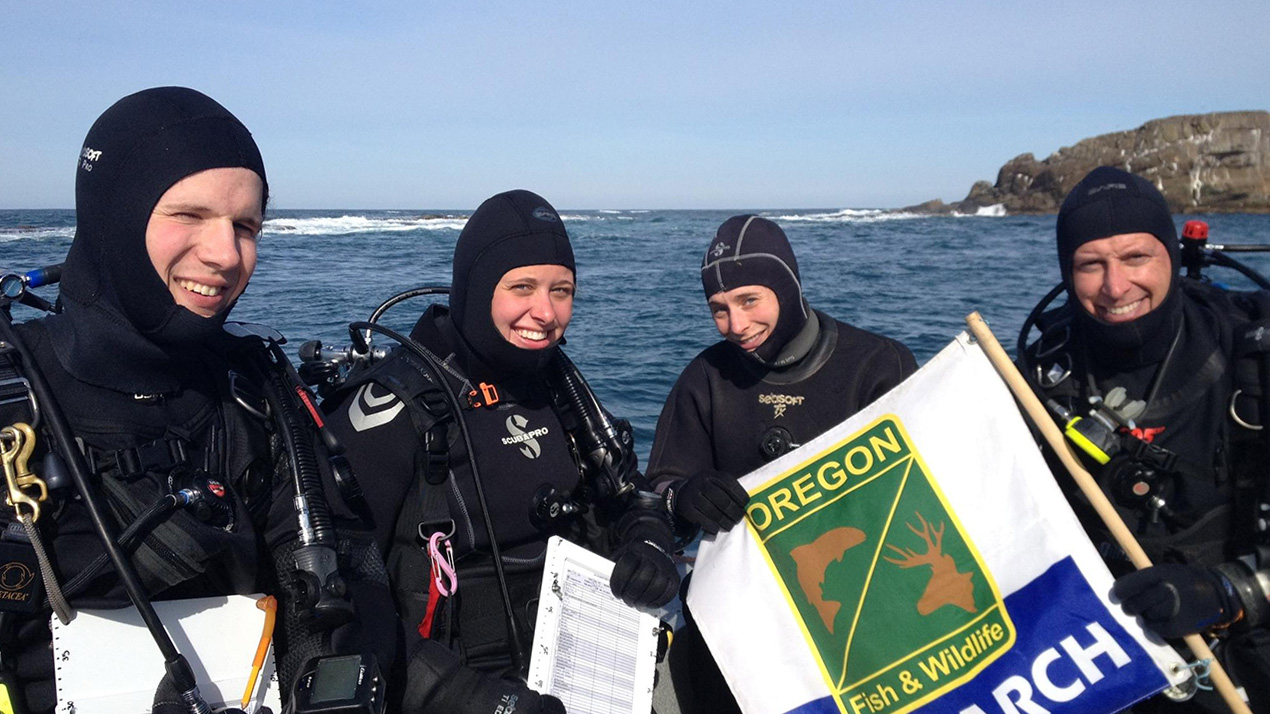 As Hollingshead continues to recount her experiences of these committed volunteers, it becomes even more evident that they are in it, together, for more than just recreational pursuits.

These are fast-paced and action-packed dives that require simultaneous attention to detail and a commitment to safety. “It’s harder than you might think,” she says of the scientific reconnaissance missions.

When conditions permit, which includes calm seas and a minimum of three meters of underwater visibility, pairs of divers drop from the deck of a boat and swim down to depths between 10 and 20 meters. Once beneath the surface, divers remain under for around 45 minutes while they survey the seafloor and water column above. Teams can conduct up to three 45 minute surveys per day, and the protocol for each dive depends on the different type of data – macroalgae, invertebrates, or fish — being collected.

Hollingshead has participated in the whole suite of dives. If she has to choose a favorite survey and subject, though, Hollingshead admits it would be fish. She recounts the surveys by detailing the tightly-crafted protocols.

“You have your underwater slate with your underwater paper,” she explains of the tools required for documenting, “and after you drop down you need to turn on the video lander camera, tie off the tape [measure], and you proceed on your survey.” 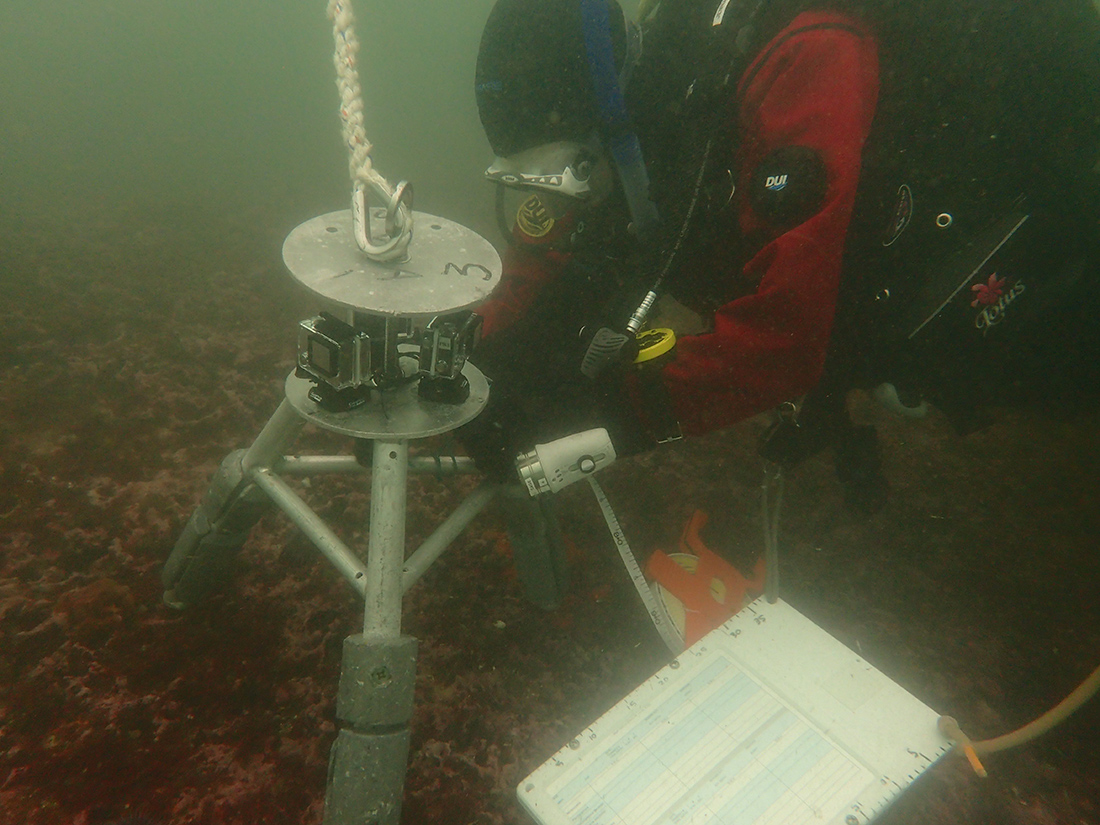 After describing the setup for the survey, Hollingshead explains the unique challenges of visually identifying and sizing individual fish in often murky waters. This is all while also establishing measurements of an area that help calculate their densities. It’s a process that can sound overwhelming, but one that Hollingshead describes with great detail and composure.

“You need to be able to size fish within 10 percent, down to a centimeter, and ID them. So you’re counting and sizing and IDing all at the same time while you’re running out your tape measure to 30 meters,” she says of the process that requires intense spatial awareness and rapid fire mental calculations. “Your dive buddy will have a stereo camera following right behind you and above you running the camera for data collection.”

Playback from the stereo camera is not only used to corroborate the data that divers are collecting on their underwater slates and paper but, along with footage from the stationary video lander, provides video ODFW can share with the public for outreach purposes. 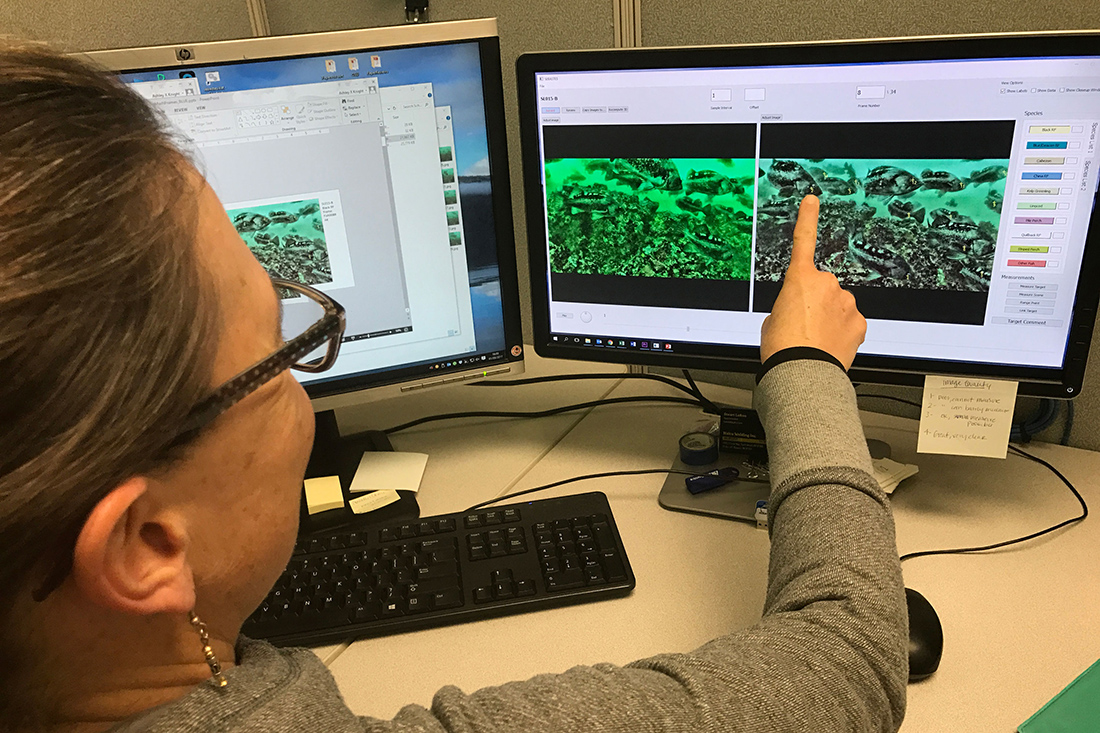 Photo: Back at the office, scientists are reviewing and analyzing video recorded by the stereo camera.

When asked what she would like to share with Oregonians who haven’t witnessed what’s beneath the surface of the ocean from her underwater vantage point, Hollingshead sighs, potentially recognizing that her opportunity to talk about diving instead of going diving is drawing to a close.

“It’s beautiful, and it can be challenging,” she says before reiterating “it’s beautiful.”

Getting to the bottom of Oregon’s natural beauty and bringing a deeper understanding of it to the surface is a mission that requires, first and foremost, a commitment to safety. Hollingshead understands the importance of safely acquiring this intelligence, and we look forward to her invaluable membership in the army of volunteer scientific divers when the surveys resume.

In the meantime, Oregonians can enjoy these underwater views and discoveries from Oregon’s marine reserves from the security of their own homes by visiting the extensive collections of photos and videos from SCUBA, video lander, and ROV surveys on the ODFW Marine Reserves Program’s Flickr page and YouTube channel.