Beneath the waves, once towering kelp beds are collapsing from an unprecedented perfect storm that has been brewing below the surface. First, a massive epidemic wiped out sea stars, then a marine heatwave and El Niño, and now an explosion of sea urchins. This means bad news for kelp. The combination of abnormally warm water and a huge number of sea urchins have taken a toll on once healthy kelp beds.

Like forests on land, kelp beds provide habitat for the animals living within them. Sea urchins, sea stars and abalone live amongst kelp beds, along with many fish species. Their fate is intertwined within a delicate ecological balance. Urchins and abalone eat seaweed and kelp, competing for the same food source. Sea stars are the main sea urchin predator.

Longtime ODFW marine biologist, Scott Groth has spent years studying shellfish and recreationally SCUBA diving off of Oregon. “I’ve spent the last decade periodically diving in a particular cove. I just went back after a few years. It looks like a totally different place. It was once full of kelp. Now, it’s loaded with purple sea urchins. And, there’s few flat abalones,” says Scott. Abalone also eat kelp and some types, such as flat abalone, are possibly facing starvation.

The recent explosion of purple sea urchins, and their range expansion into deeper water, poses a serious question: What’s causing these changes? Marine scientists have more than just a hunch. And they believe that the problem is more complex than simply sea urchins eating kelp. There were a few really warm years in the ocean spanning 2014 to 2016. A perfect storm of unusual events delivered a powerful one-two-three punch for marine life.

First, 2014 ushered in widespread sea star wasting disease that resulted in rampant devastation, damage, and death for millions of sea stars. It was the largest marine animal disease event in recorded history, wiping out sea stars in tidepools, and beneath the waves.

Since then, some types of sea stars have shown signs of recovery while others are still rare or gone entirely – namely, the sunflower star; the main predator of sea urchins. The sunflower star is a many-armed sea star that is more common below the surface than in tidepools. At least, they used to be. Since the epidemic, sunflower stars are effectively absent from Oregon’s coastal waters. Without sunflower stars to eat sea urchins, sea urchin numbers have skyrocketed. 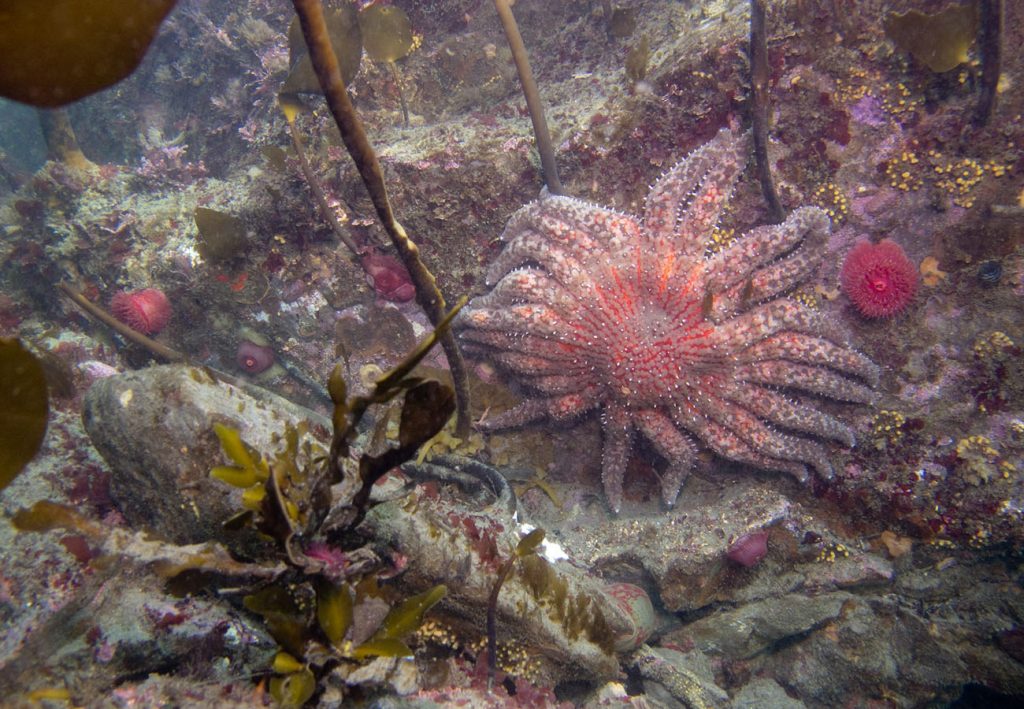 While sea star wasting disease was occurring powerful global ocean regimes exerted their own force. In 2014, an unprecedented marine heatwave, or large-scale “blob” of unusually warm water, formed in the north Pacific. For two years it spread along the West Coast of North America causing large ecological changes.  Then, in 2015, a strong El Niño further increased ocean temperatures. On their own, each of these events can stress out marine life. Kelp growth and nutrient absorption slows or stops in warmer waters. But, the unlikely combination of the epidemic, El Niño and massive marine heatwave is completely unparalleled. Even for scientists who have spent their entire careers studying the ocean.

“It’s like we are caught up in a vortex of abnormal ocean events and it’s scary. This is a whole new realm of marine ecology,” says ODFW marine biologist Dr. Steve Rumrill. “Convergence of all of these events over a short time period presents the possibility that we have entered a new era of shifting ocean conditions. In my over 40 years as a marine scientist along the west coast, I have never witnessed events like these. Abnormal appears to be the new normal.” Concern is mounting that events like the ones that happened in 2014-2016 may become increasingly common, and also more intense. “We are at a loss to understand all the moving parts that that result in changes like we’ve been seeing,” says Dr. Rumrill. 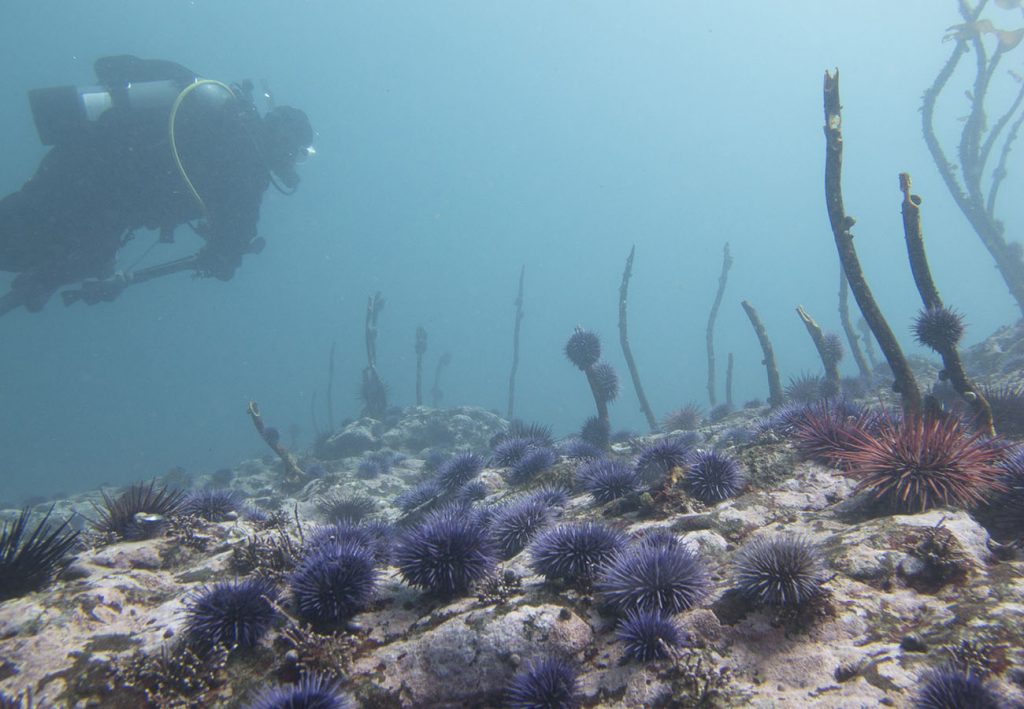 Photo: A diver surveys sea urchins in the remnants of a former kelp bed located off the southern Oregon coast.

ODFW researchers periodically conduct underwater surveys of sea urchin populations at several sites along the coast.  These days, they are seeing the highest numbers of sea urchins ever observed in over three decades. Like Oregon, California is also experiencing a dramatic explosion in the population of sea urchins.  Kelp forests in California have been stressed due to unusually warm ocean waters, and then decimated by hungry sea urchins.

Early signs are pointing to a comparable cascade of events along the Oregon coast. “Unfortunately, our situation with regard to kelp, sea stars, urchins and abalone in Southern Oregon is similar to California,” said ODFW Shellfish Biologist Scott Groth.

A sea urchin population explosion looks as if the entire seafloor is carpeted with prickly red and purple pin cushions. Sometimes these dense populations become “urchin barrens” when the urchins consume everything in their path. Areas that were once towering kelp forests with abundant fish and a rich understory of seaweed and marine life are transformed into an endless underwater field of sea urchins. Once an urchin barren occurs, all the fish and animals that depend on kelp forests disappear along with the kelp. Plus, there is no going back – urchin barrens are an environmental tipping point. Once created they can persist indefinitely.

Sea urchins are incredibly resilient animals. They can survive off virtually no food, and it takes them years (yes, years) to die of starvation. Plus, in the absence of food they essentially hibernate. Oh yeah, and they can absorb nutrients directly from the surrounding sea water. Basically, sea urchins don’t die from lack of food alone.

Sea urchins can persist when other marine life would perish.

“Purple sea urchins have a long life-span of up to 50 years,” says Dr. Rumrill, “and they have the ability to effectively go dormant and slow down their metabolism and growth dramatically during food shortages. Sometimes they may even shrink during periods when food is scarce.”

Sea urchins can persist when other marine life would perish. They are always on the hunt for drifting algae, seaweed and kelp.  Consequently, when sea urchin numbers are high, kelp bed recovery may be slow, if it happens at all. A starving sea urchin is always ready and waiting for any new food, and the competition is fierce for other types of marine life.  Abalone are large marine snails that, like sea urchins, eat seaweeds and drifting algae. When massive numbers of sea urchins eat all available food, abalone are among the first to starve.  Unfortunately, unlike sea urchins, abalone cannot survive long periods of starvation, and their populations begin to decline.

Since there’s literally a lot of sea urchins in the sea – one suggested solution to the prickly problem has been to eat them. Urchin roe or “uni” is prized for sushi worldwide. Unfortunately, sea urchins harvested from an urchin barren is not an appealing option since they contain next to no roe. A lack of food and the absence of kelp causes sea urchin reproductive organs to degrade, shrink, and resorb. The lack of plump gonads and poor quality of uni makes the current crop of purple sea urchins essentially unmarketable. So the problem persists.

Like any ecosystem, extra stresses and unusual events can tip a delicate ecological balance

Like any ecosystem, extra stresses and unusual events can tip a delicate ecological balance – and it’s looking like another unusual year. Recently, the National Oceanic and Atmospheric Administration announced the emergence of a new marine heatwave along the west coast of North America that is similar to “The Blob” from a few years ago. This new heatwave is only a few months old and it is already the second largest on record.

Meanwhile, ODFW scientists are keeping a wary eye on the seafloor via long-term monitoring programs, such as the research conducted within Oregon’s Marine Reserves. Long-term monitoring occurs when areas are repeatedly studied over time. This arms researchers with valuable information to discern differences between seasonal fluctuations and annual variation, versus more substantial and longer-lasting changes that may signify climate change.