SMURFing is hard work – it takes a lot of effort and collaboration to get the SMURFs in the water. Collecting the fish requires an early morning start, long drives, and sometimes late nights processing samples when hundreds of juvenile fish decide to settle all at once. So why bother with all this effort just to collect juvenile fish? For the Oregon Department of Fish and Wildlife (ODFW) Marine Reserves Program, these fish give us a deeper understanding of what’s going on beneath the surface in the reserves. 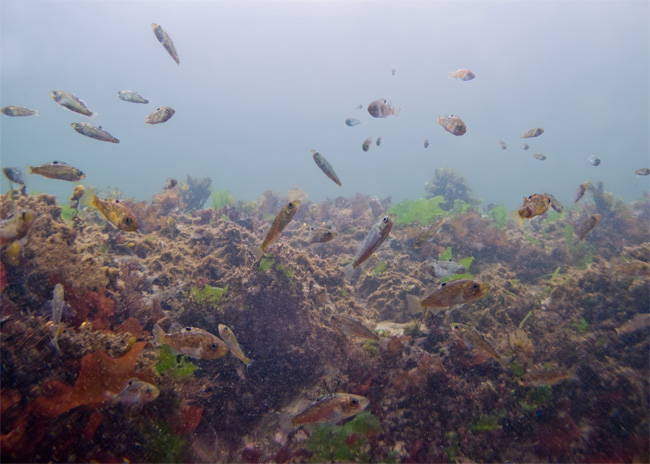 The mission of ODFW is to protect and enhance Oregon’s fish and wildlife and their habitats for use and enjoyment by present and future generations. The Marine Reserves Program wants to understand how Oregon’s marine reserves are accomplishing this mission. Some of the juvenile rockfish that make their home in the reserves can live for over 100 years! Knowing what habitats they use both inside and outside reserves during different stages of their life can help us effectively sustain these populations for the future. SMURFs give us that important information.

Larval fish are at the mercy of ocean currents before they develop into juveniles. Ultimately these juveniles will settle in nearshore habitats, where the SMURFs are moored. Where they settle hinges on multiple factors. Water temperature, ocean chemistry, and currents all play a role in settlement patterns.

Data from our SMURFs show us how settlement patterns differ along the coast. Because our SMURF sampling occurs at multiple reserves (along with areas adjacent to the reserves), we can explore if differences in juvenile fish between these areas are a result of where the Marine Reserves were placed. Understanding where and why these fish settle where they do is exactly why we SMURF.

Unfortunately, this past week of SMURFing was  was a rough one. We were at Redfish Rocks Marine Reserve this week, and four of our SMURFs were gone when we went to collect our fish samples from them (bad weather being the likely culprit). Oregon’s coastal waters are known for their unforgiving nature and conducting fieldwork in them is always an adventure. However, the SMURF team is undeterred and has already begun building new SMURFs and moorings. As the old saying goes – the SMURF must go on!

Keep checking back here on the Marine Reserves news page for updates on our upcoming rebuilding efforts, future SMURFing outings, and more SMURFing essential information. Also, if you missed our earlier posts about what we found during week 10 and week 11 sampling, be sure to check them out.