From beach cleanups to family fishing events to ecological monitoring surveys, it’s almost impossible to attend a volunteer event on the central Oregon coast without crossing paths with Don Sarver. Join us as we talk with this stalwart fisherman and avid volunteer as he shares his reasons for volunteering, some of his most memorable moments and what he has learned about Oregon’s marine reserves in the process.

The rain starts to fall as Don Sarver stands at attention next to the shiny red pickup truck parked in his driveway. He’s instructed to scoot closer to the stickers that cling to the rear windshield depicting Oregon’s marine reserves, as the rain falls on the commemorative patches sewn into his jacket from his years of volunteering. The impending springtime shower is as reliable as Sarver’s willingness to volunteer in work along this wet stretch of coastline. He steps into frame without hesitation and proudly poses with the insignia earned from his efforts.

Sarver is no stranger to Oregon’s marine reserve sites, and he has the merits to prove it. 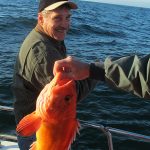 The Newport resident is top brass in an army of volunteers that enlist their time, energy and expertise to help power the research activities conducted by the Oregon Department of Fish and Wildlife (ODFW) Marine Reserves Program. Sarver is a dedicated volunteer angler in ODFW’s hook-and-line surveys, which are tracking fish sizes and abundances inside and outside of the marine reserve sites.

Hook-and-line surveys are one of the four core, long-term ecological monitoring surveys being led by ODFW to track and monitor ocean changes in Oregon’s marine reserves and nearshore ocean. Each year up to 20 days of hook-and-line surveys are conducted and they depend on volunteer anglers such as Sarver to catch and reel in the fish, which are then quickly identified to species and measured for length by ODFW scientists before being released back into the water. 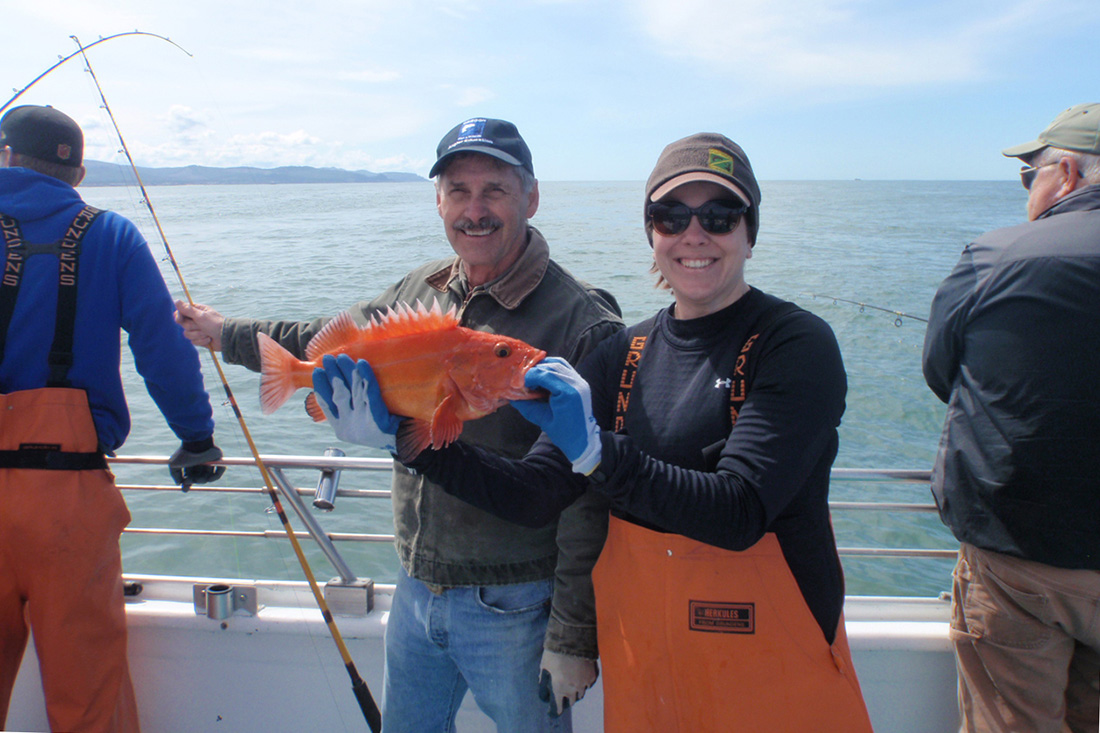 Despite missing a sticker on his truck for the Cape Perpetua Marine Reserve, Sarver has actually participated in ecological monitoring efforts at all five of Oregon’s marine reserves. His long-standing volunteerism in these waters dates back to when they were first designated as protected areas. The timeline runs almost parallel to his experience as an ocean fisherman, a hobby he has developed after retiring to the Oregon coast. Even after a decade of living at the coast and countless hours of commitment to his hobby, Sarver still considers himself a novice.

A humble claim, coming from the president of a local fishing club who is also certified by ODFW to teach angling skills to the public. He was the recipient of ODFW’s Dave Liscia Volunteer Award in 2018, for his outstanding service working in both river and marine systems. But reasons for his humility rise to the surface as he explains the depth of experience from fellow anglers on deck during the marine reserve hook-and-line surveys.

“The guys are a bunch of fishermen; ex-guides, ex-charter boat guides, ex-commercial fishermen,” says Sarver of the fishers who volunteer on the research trips, “these guys really know what they’re doing.” 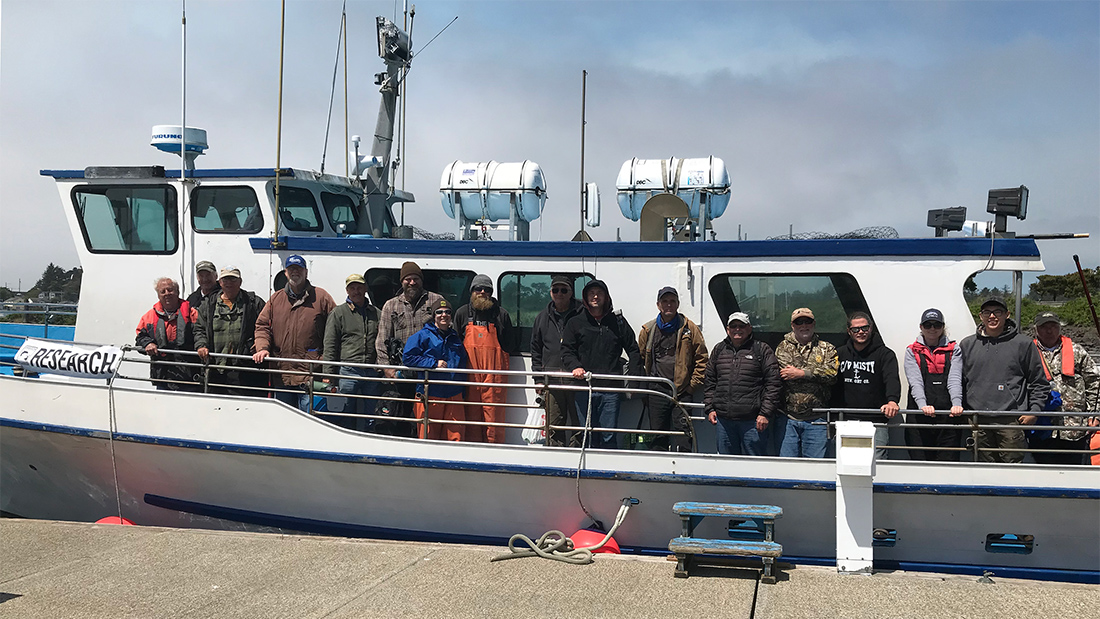 His enthusiasm for fishing and admiration for those who have practiced and perfected their craft is evident as he speaks both of these trips and his other, strictly recreational fishing pursuits. This is also apparent in his admittance of using the hook-and-line surveys to practice his fishing techniques, the refinement of which also contributes to producing more data. It’s a learning experience within a learning experience.

In both his recreational and volunteer endeavors, and the lines that blur between them, Sarver is no stranger to the ocean’s biodiversity that Oregon’s marine reserves aim to conserve. Sarver recalls his most diverse catch during one survey, when they were collecting data in one of the research comparison areas for the Cape Falcon Marine Reserve.

“I had a day where not only did we catch every kind of rockfish known to man, but on the drop, I caught a Coho (salmon), and that same day, I caught about a 35-pound Halibut,” Sarver recounts. 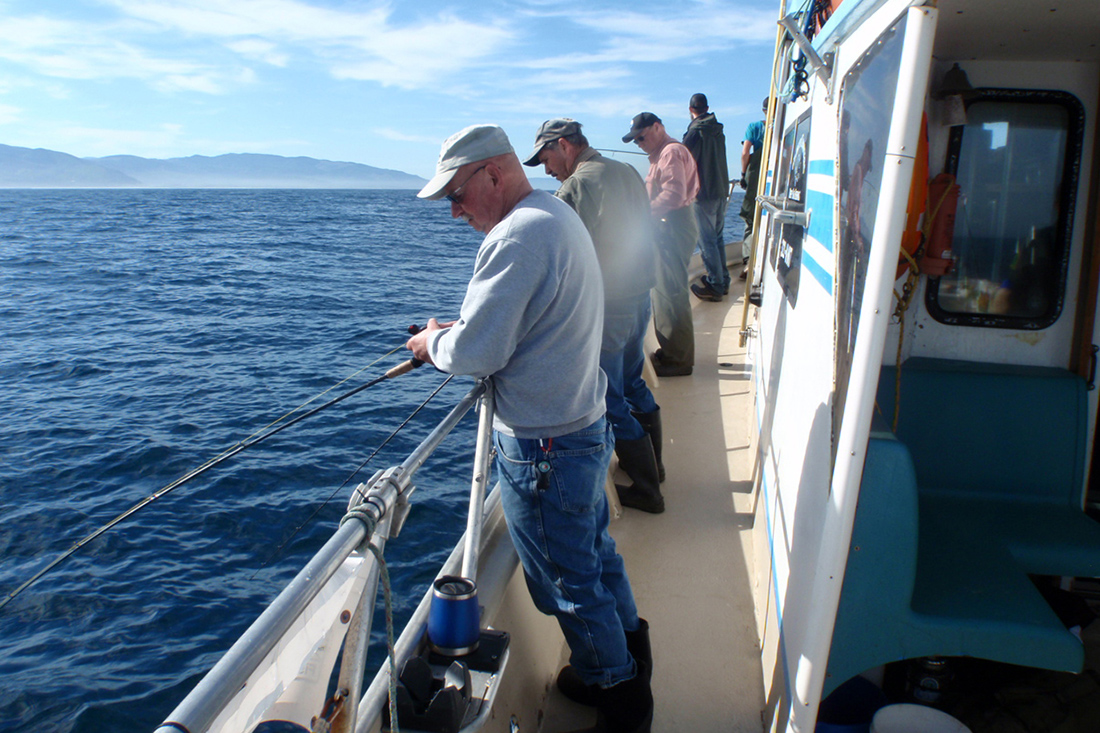 Echoing the sense of enjoyment for the activity itself is the camaraderie among the anglers that comes with participating in the activity. As Sarver describes them, scenes from hook-and-line surveys are similar to those that often play out on recreational fishing trips.

Fun and socializing aside, the angler is also quick to recognize that these benefits are supplemental to the science that the marine reserves are designed to produce.

“It’s a fun fishing trip, but on the other hand, it is a scientific study,” says Sarver “and they are comparing this every year to see do we get more, do we get less, do we get more variety, are the fish bigger. So it’s kind of neat to see that.”

“It’s a fun fishing trip, but on the other hand, it is a scientific study.”

While serving on the front lines to monitor the potential changes in sizes and abundance of fish within the reserves compared to areas outside the reserves, Sarver has also witnessed a few uncommon catches. These types of encounters are further opportunities for volunteer anglers and scientists alike to learn from these living laboratories. Sarver recounts reeling in a species at the Redfish Rocks Marine Reserve that is fairly common off the coast of California but not as frequently caught in Oregon waters.

“The weirdest thing I guess I’ve caught was a Gopher Rockfish, and I’d never even heard of it,” Sarver says of the species that also left the scientists on board baffled, “they didn’t know what it was and had to look it up in the book to figure out.”

Surprises aside, Sarver pauses as he’s prompted to think of a species he has yet to catch on a hook-and-line survey.

“I think I’ve caught most everything that they catch,” he says before listing off a number of species, many of which he has posed for photos alongside, “but a really big Cabezon would be fun.” 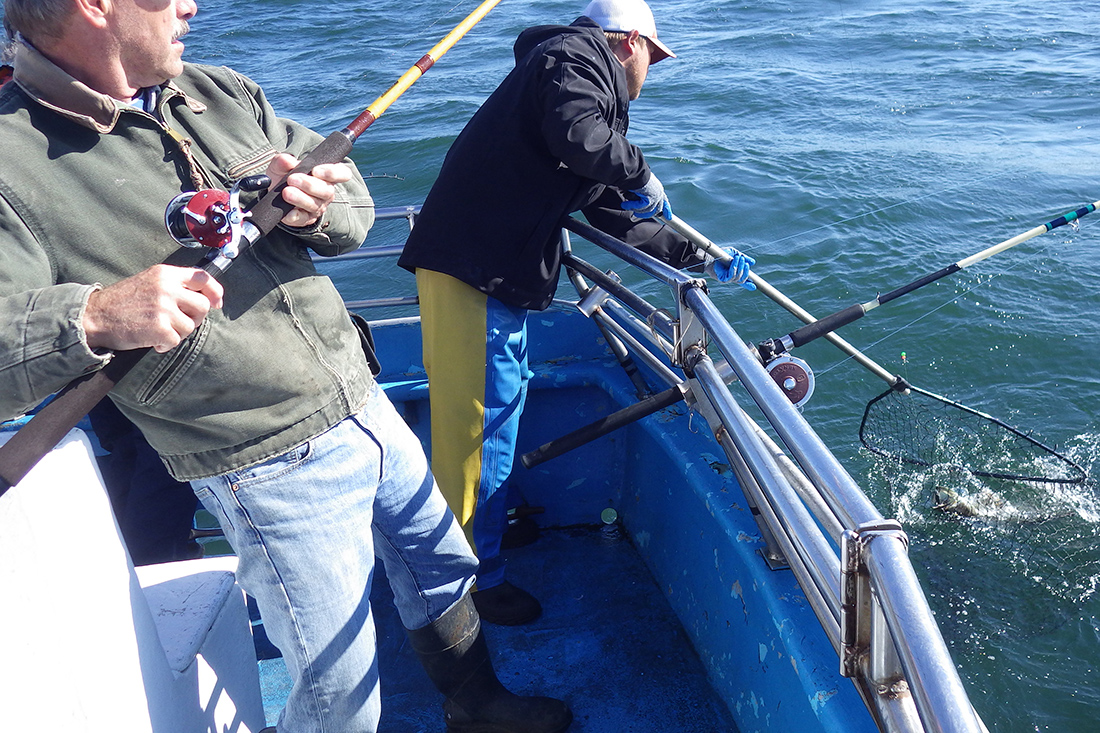 But it’s clear that the allure of catching an oversized Cabezon isn’t what keeps Sarver coming back for one volunteer activity after the next. In addition to his admitted inability to say “no” to these opportunities, for Sarver, the input of his volunteer efforts is multiplied in their output.

“The more I give, the more I get,” says Sarver of his reasons for volunteering, “so much has come back to me from all of this kind of stuff.”

In return for his almost countless volunteer efforts in Oregon’s marine reserves and with ODFW, Sarver has been able to sharpen his angling skills in the name of science and carry it over to his purely recreational pursuits. It’s also an experience that has provided him with access to picturesque areas of Oregon’s nearshore ocean that are otherwise restricted from fishing, while further submerging himself in a community of anglers that is committed to the science that comes from them.

“It’s neat to be able to go out there and do what hardly anyone else can do and get a little better and maybe provide the state with information to make things a little better on the fishery,” says Sarver, “it’s such a fun thing all the way around.”

“What else do you need?” he adds rhetorically.

Looking at his truck, Sarver needs a sticker for his volunteer efforts at Cape Perpetua Marine Reserve. We’ll be sure he receives that insignia soon, hopefully on yet another hook-and-line survey as he joins the small army of volunteers working with ODFW researchers to produce science from Oregon’s marine reserves.

For updates on ODFW’s hook-and-line surveys and other monitoring and research activities happening at Oregon’s marine reserves, sign up for our monthly eNewsletter.