Sea stars commonly dot rocky surfaces in and around Oregon’s marine reserves, although large ones have been less frequently seen over the past several years. We invited guest author, filmmaker and photographer, Stephen Grace, to share some of his photos and perspective on intertidal sea stars here in Oregon.

A few years ago Oregon’s intertidal zone was stacked with starfish, their brilliant bodies splashing red, orange, and purple color across rock surfaces when the tide receded. Now, few tidepools are brightened by the starfish that survived a recent plague of sea star wasting syndrome, the largest observed die-off of marine animals in recorded history. 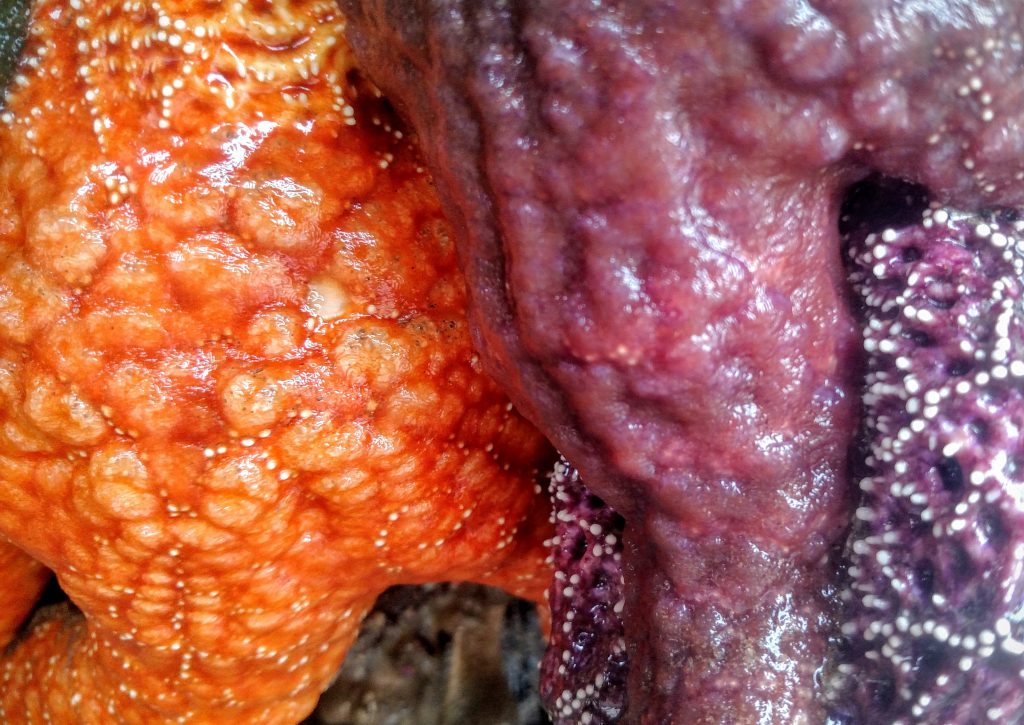 The ochre starfish (Pisaster ochraceus), popular among tidepoolers for its pretty colors, performs the role of predator in the intertidal zone. This carnivore uses suctioned tube feet powered by hydraulic pressure to pry open a mussel shell. The ochre starfish (or “sea star,” as scientists prefer) needs only to open a mussel shell a sliver. The sea star makes use of a slit less than a millimeter wide by thrusting its stomach out of its body and into the shell to slurp the mollusk’s soft flesh. Pretty this sea star may be, but peaceful it is not.

Scientists consider this slayer of mussels a keystone species, a top predator that plays a critical role in an ecosystem. When the ochre sea star disappears from the intertidal zone, the ecology of the ocean’s edge undergoes a dramatic shift—similar to an arch collapsing when the keystone that holds the structure together is removed. Without the ochre sea star keeping the population of its prey in check, mussels cover the intertidal zone, displacing other species and diminishing diversity.

This keystone species concept was demonstrated in a classic experiment in the 1960s. A clever scientist removed all ochre sea stars in a study plot and observed the consequent downward creep of mussel beds. Mussels are limited in how low they can go on rocky surfaces not by ocean conditions but by sea star predation. Put another way, the bottom edge of a mussel bed is the upper limit of the ochre sea star’s hunting range. This sea star species has evolved to withstand being out of the water for up to eight hours at a time. But if this marine creature climbs too high in order to hunt mussels, it is exposed to air beyond what it can tolerate, and it desiccates and dies.

The ocean is vast. But rocky real estate at the water’s edge is relatively rare, creating fierce competition for space. Almost every hard surface is crammed full of creatures that need to attach somewhere solid. In healthy tidelands, mussel beds dominate the upper zone where sea stars can’t survive. But mussels cannot cover the lower regions of rocky terrain in the sea star’s hunting zone, leaving habitat available for other species. When sea stars were removed from the experimental plot, mussels cornered all the housing options, sending other creatures packing.

In the absence of the tidepools’ top predator, mussels modify the entire habitat of the rocky intertidal zone. This ecosystem engineering benefits some creatures that thrive in the layered spaces of mussel mazes. But when mussel beds monopolize rocky real estate, little room is left for other organisms that need to anchor themselves directly to blank surfaces, leaving seaweeds, sponges, and anemones homeless.

Similarly, when wolves were extirpated from Rocky Mountain National Park in a misguided effort to slaughter top predators, elk herds flourished unchecked. This led to ecological mayhem as elk devoured aspen forests and willow communities, creating a cascade of consequences that altered the region’s ecology. Tidepoolers often assume sea stars are docile plankton eaters. But the ochre sea star is like a wolf that prowls the ocean’s edge, a tiger of the tidepools.

Beginning in 2013, the entire Pacific Coast between Alaska and Mexico seemed the subject of a bizarre experiment, as though a mad scientist had flipped a switch that made sea stars vanish. The sudden absence of the ochre sea star startled beachgoers and spurred scientists to study the causes and consequences of sea star wasting syndrome. Researchers found that many other species were vanishing along with the ochre sea star, including one of the world’s largest and fastest sea star species.

The sunflower sea star (Pycnopodia helianthoides) is an Olympic sprinter of intertidal creatures. This animal that grows up to a meter long can move a meter a minute. In two years of stalking the ocean’s edge along Oregon’s North Coast I have yet to see a sunflower star. These speedy beasts with twenty to thirty arms passed into legend as they vanished from the intertidal zone. Only tales told by tidepoolers remain: accounts of prey species like urchins and snails fleeing for their lives as this storied super-predator prowled the pools, racing to capture creatures with its suctioned tube feet.

Sunflower sea stars prey on urchins, which feed on kelp. The great kelp forests of our planet teem with life that rivals tropical rainforests in diversity and productivity. Urchins, their numbers unchecked by their vanished sea star predators, have decimated kelp—much like the elk browsing willows down to bare streambanks in the absence of wolves. Rich forests of kelp along the Pacific Coast have been replaced by urchin barrens. These denuded plains no longer nurture myriad creatures, including juvenile fish of commercial importance. The influence of sea star wasting syndrome can be felt as far away as coastal communities that rely on healthy fisheries, illustrating a core principle of ecology: everything is connected.

So what caused this ocean plague of staggering scope? Sea star wasting syndrome is a complicated puzzle. A virus is associated with the syndrome, but the virus has been found in preserved sea star specimens seventy years old. Why the virus is suddenly causing such widespread mortality is a question that continues to challenge scientists. There have been plagues of wasting disease in past decades, but never has an outbreak occurred over such a broad geographic area or annihilated such vast numbers of sea stars.

Research has revealed a link between high ocean temperatures and increased virulence of wasting syndrome. Beginning in late 2013 and persisting into 2016, a mass of unusually warm water along the West Coast dubbed “the blob” adversely affected many forms of marine life. A leading hypothesis is that the high ocean temperatures of the past few years stressed the sea stars, making the creatures more vulnerable to the viral pathogen, and leading to the unprecedented wave of sea star death that recently swept the Pacific Coast.

Sea stars are known for their ability to regrow severed arms. So potent is their regenerative power, when they lose all their arms but one, the lone limb can sometimes grow into a whole new sea star. Stories tell of fishermen who hated starfish that preyed on crabs in their traps; the fishermen sliced the predators in half and threw them back into the sea. As in a fable, one crab-eating starfish became two. Rising ocean temperatures, however, could be the end of the story for sea stars.

The good news is that tremendous numbers of juvenile ochre sea stars have recently been seen in the intertidal zone. Now the size of a quarter or dime, these silvery creatures secreted away in cracks and crevices of rocks will perhaps escape the fate of their ancestors and once again paint the intertidal zone with striking color as they mature. Or maybe as these creatures age they will succumb to the syndrome, developing lesions, contorting their limbs, and melting into mush as they follow the fate of the wasted generation before them.

Scientists have identified a gene some sea stars have that makes them resistant to wasting syndrome. Scientists have also determined that adult sea stars succumb more readily to the syndrome than juveniles do. Pieces of research are snapping into place, but the overall puzzle of the syndrome remains to be solved.

No one knows for certain if large populations of healthy adult sea stars will return to the Pacific Coast, and the changing intertidal zone in their absence is an ongoing area of study. As a citizen scientist, I join other concerned citizens in following established scientific protocol to collect sea star data for scientists. Researchers use this data as they continue to investigate what caused this vast upheaval in ecology at the ocean’s edge.