In winter and spring, Oregon’s beaches can turn a vivid hue of purplish blue. Known as “By-the-Wind Sailor,” the Velella velella is a living blue boat at the mercy of the winds. (Velella is one rare instance of an animal’s scientific name being more fun to say than its common name). Storms blow these odd creatures with melodious names ashore, stranding them in uncountable numbers. 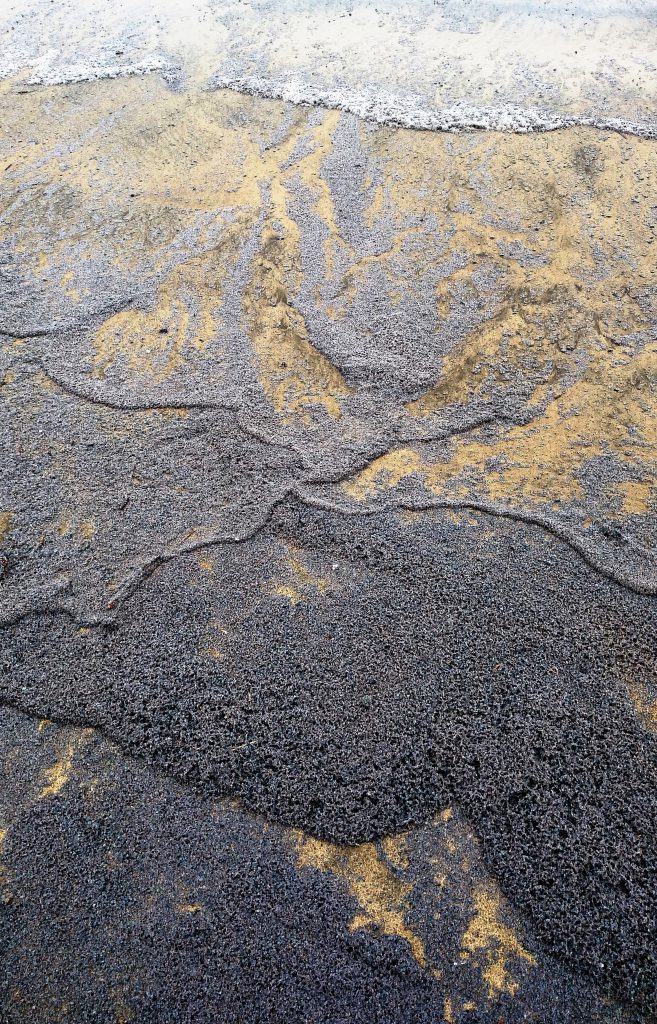 Cousin to anemones, jellyfish, and the Portuguese man o’ war, velella is a carnivorous predator. Toxins in its tentacles are deadly to its plankton prey but don’t pack enough punch to poison humans. However, some people with sensitive skin report rashes after handling these stinging hydrozoans; touching your eyes or mouth after touching a velella is not recommended. Also not recommended is running, or even walking quickly, across a velella-covered beach, which becomes a slippery mess as the creatures decay. And the reek of rotting velella can ruin a beach picnic.

A by-the-wind sailor is not a single creature. Rather, it is a colonial organism: a collection of hydroid polyps that clone themselves, build a buoyant boat with a stiff triangular sail, and take on specialized functions of protection, feeding, and reproduction—similar to cooperating crew members of a ship who perform tasks of guarding the boat, catching fish, cooking meals, and so on. The individual polyps of a velella colony are linked together by a digestive canal through which they share food. Each velella is a busy world of specialized polyps borne on a tiny boat across the wind-stirred seas.

The sex life of this blue sailor is bizarre. Reproductive polyps of a colony make many tiny medusas—basically miniature jellyfish. Each medusa, after it leaves the colony and develops to sexual maturity, broadcasts into the water either eggs or sperm, which mix to create a larva that grows into a colony of hydroid polyps; then this new colony produces more medusas to continue the cycle.

A velella that washes ashore is sometimes gobbled by a hungry gull. In the open ocean, by-the-wind sailors are eaten by the ocean sunfish, a creature that can grow to more than 2,000 pounds. These behemoths rise toward the surface to sip velella, and colonial organisms a couple of inches long become the flesh of the largest bony fish on the planet. Velella is also preyed upon in the ocean by a species of purple snail that makes a bubble raft to stay afloat as it stalks its sailing prey. The by-the-wind sailor is also hunted by a sea slug known as the blue dragon.

When velella by the billions arrive in Oregon, covering vast stretches of beach in purple haze or painting the shores electric blue, I hunt for the legendary blue dragon nudibranch (Glaucus atlanticus). This gorgeous sea slug with fingerlike projections reminiscent of dragon wings uses a gas-filled sac in its stomach to float upside down. The blue side of its body faces upward, blending with the water to hide the creature from birds. The blue pigment is also thought to be a sunscreen that protects the blue dragon from the harsh UV rays that bombard the ocean’s surface; velella uses the same blue pigment to shield it from the sun. The slug’s silver side faces downward, merging with the silvery surface of the sea to conceal the creature from fish. This camouflage scheme is similar to the black-and-white color pattern of a penguin or a common murre that helps the birds avoid being eaten from above and below. But the blue dragon has a defense much more stunning than countershading.

This predatory sea slug attacks not only velella but also the Portuguese man o’ war. The blue dragon stores stinging cells from the tentacles of its poisonous prey, stealing deadly man o’ war missiles for use as its own protection. A carnivorous kleptomaniac, the blue dragon can deliver a powerful sting to animals that try to eat it—and to people who pick one up, thinking it’s just a pretty curiosity floating in the water or lying on the sand.

The blue dragon has been found in tropical and temperate oceans all over the word in association with velella. Though I’ve heard of neither a blue dragon nor a Portuguese man o’ war washing up on local shores, I’m keeping my eyes peeled. It’s unlikely either of these species will appear on my backyard beach, but not impossible.

I saw a dead longnose lancetfish in a driftline near my home a few weeks back. With a snaky body, spiky sailfin, and barracuda teeth, this four-foot-long denizen of the deep seemed like a mythical sea beast. A living loggerhead turtle was stranded on the same beach this past winter. A pelagic red crab species common to the coast of Mexico recently turned up in Oregon. This crustacean that resembles a little lobster is rarely seen north of San Francisco but washed up this spring as far north as Seaside. And a Pacific snake-eel from subtropical waters caused a stir in southern Oregon when three sinuous feet of snake-like body leading toward a fanged mouth appeared on a beach.
The Pacific Ocean covers half the planet, and anything could turn up along the coast—especially in times of exceptionally warm water, as in recent years, when creatures from tropical latitudes followed warm currents northward to Oregon’s chilly shores.