Crabs scurry in and out of rocky crevices in tidepools, and along the sandy bottom beneath the surface of the waves. We invited guest author, filmmaker and photographer, Stephen Grace, to share his take on on intertidal crabs in Oregon.

Crabs add drama to the intertidal zone. The lined shore crab (Pachygrapsus crassipes) skitters sideways, scooting over rocks and across sand as it searches for algae and small animals to eat. During the day this flat crab hides from predators by slipping into rock crevices. When forced to face a creature that wants to eat it, this scrappy little fighter—smaller than a silver dollar—rears up, extends its claws, and prepares to do battle with beings that tower above it. If a gull grabs one of the crab’s legs, the captured crustacean can escape by shedding its limb; the crab then grows a new leg. 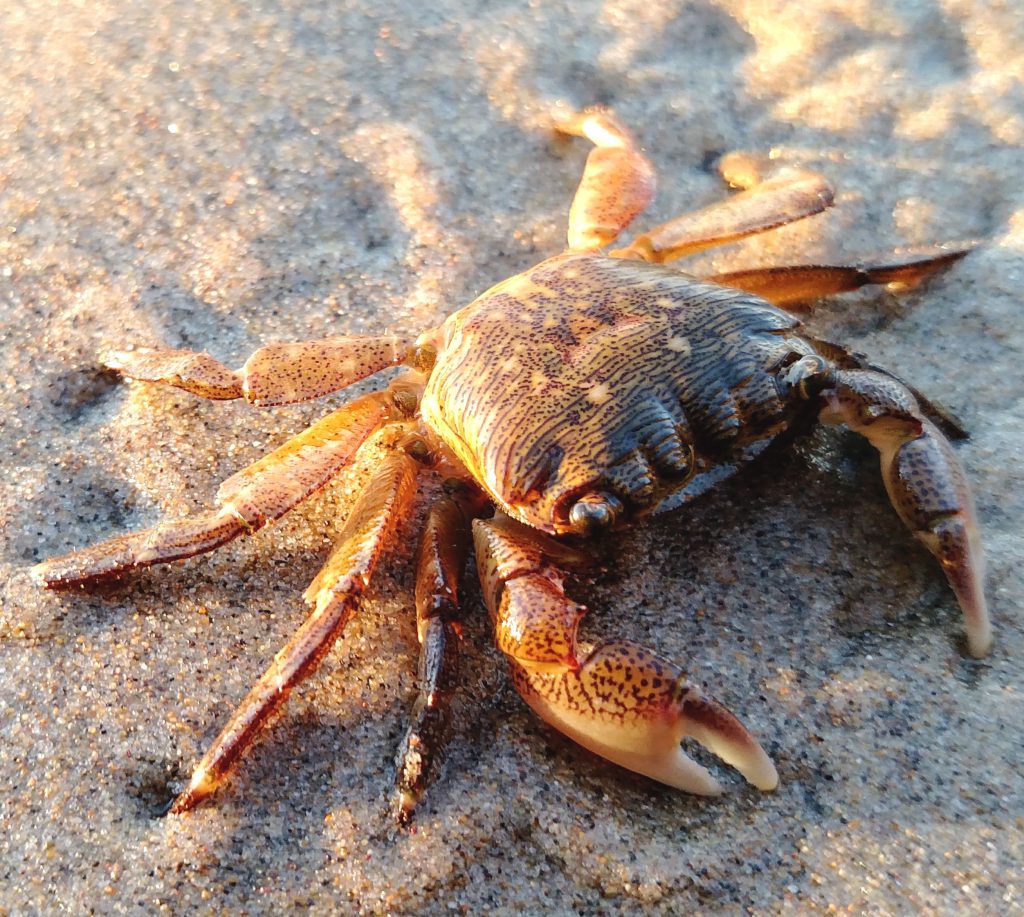 I often hear shore crabs clattering across rocks several feet above the water and see them hurrying over sand several yards from the nearest tidepool. The lined shore crab spends at least half its life out of the water. After venturing across dry terrain, it returns to the sea to dampen its gills, which stay moist in sealed chambers that store water—a useful adaptation for a creature that ventures beyond the ocean’s edge.

A marine creature transitioning into a terrestrial animal, the lined shore crab carries a bit of the sea in its gills as it crawls sideways across the alien shore that we now call home. We also carry some of the sea, our ancient home, within us—as salt in our blood and sweat and tears.

Perhaps the least crablike of all intertidal crabs, the mole crab (Emerita analoga) has been described by beachgoers as everything from a little armadillo to a giant bug. This crab smaller than a thumb goes by many names: sea cicada, sand flea, sand fiddler, and sand crab. The tips of a mole crab’s legs are blunt paddles adapted for digging in sand, instead of the sharp pinchers of other crabs. Kids derive endless delight by digging up mole crabs with their bare hands and then watching the busy creatures rebury themselves. The sand-colored crabs melt into the shore in little more than a second, disappearing in liquefied sand, vanishing like a magic act. 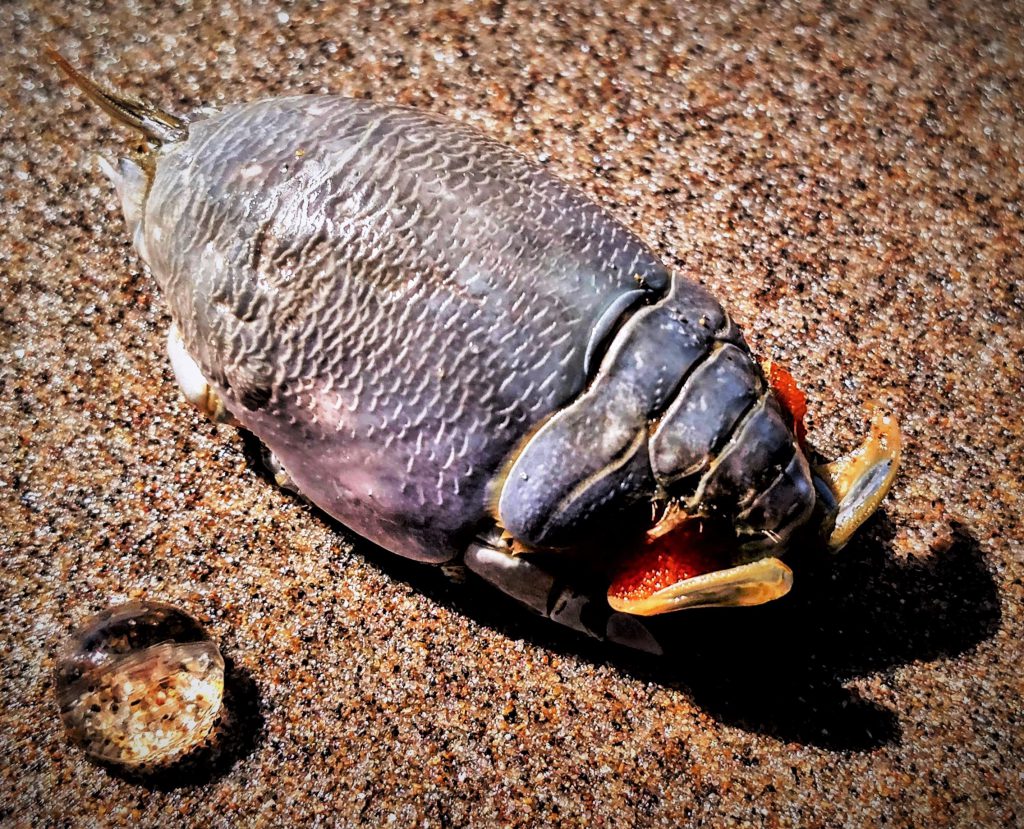 Fattening on plankton and in turn feeding birds and fish, the mole crab is an important link in the food chain at the ocean’s edge. Gulls do the “seagull shuffle,” lifting their feet up and down at the edge of pools to loosen mole crabs from the sand. Surfperch lurk just offshore, gorging themselves on mole crabs tumbling through the waves.

Unusual for crabs, the mole crab can tread water and swim. Whether in the ocean or on the shore, the creature can move in only one direction—backwards—unlike most other crabs that scurry side to side.

With its ten legs tucked in toward its body, the mole crab is rolled like a little barrel by the surf. In the swash zone, where waves break on the shore, the mole crab burrows backward into the sand, hiding from predators and anchoring itself in place to feed. A buried crab faces seaward with the stalks of its eyes poking above the sand and a pair of breathing antennae extended to funnel water down toward the creature’s gills. When waves wash over the crab, it unfurls a pair of feeding antennae: long, feathery appendages that comb the water for plankton.

Female mole crabs are usually twice as large as males; sometimes several small males cling to a female that drags its suitors through the sand. After the crabs mate in spring and summer, the female produces eggs of vibrant orange. She keeps this brightly colored cargo stashed against her abdomen, brooding the eggs for a month until they hatch into larvae. The larvae drift as plankton, wandering the sea for two months or more until they settle on a distant shore, where the wet sand bubbles with their burrowing.

When mole crab populations explode, liquefied sand at the ocean’s edge seems to boil as countless numbers of the creatures bury themselves, racing to hide from the beaks of hungry birds, and hurrying to anchor themselves in place as the waves wash in, bringing a bounty of microscopic food.

Only the fast survive: the more quickly a mole crab burrows into the sand, the less likely it is to be eaten. Sluggish burrowers end up in the bellies of predators, and if the slow crabs that are eaten haven’t yet bred, their genes aren’t passed on to the next generation. In time, through many hundreds of generations, the overall burrowing speed of the species increases. But their predators also get faster. Fish and birds that manage to snatch mole crabs before the creatures disappear into the sand pass on the genes that make them swift, and an evolutionary arms race between predator and prey plays out at the ocean’s edge.

Our species, born of the natural world, retains the aggressive and competitive drives that allow individuals to survive. But we also cooperate in remarkable ways, including the collaborative enterprise of science. Researchers use the mole crab in neurological studies because the sensory neurons in the creature’s tail are the largest known of any animal. 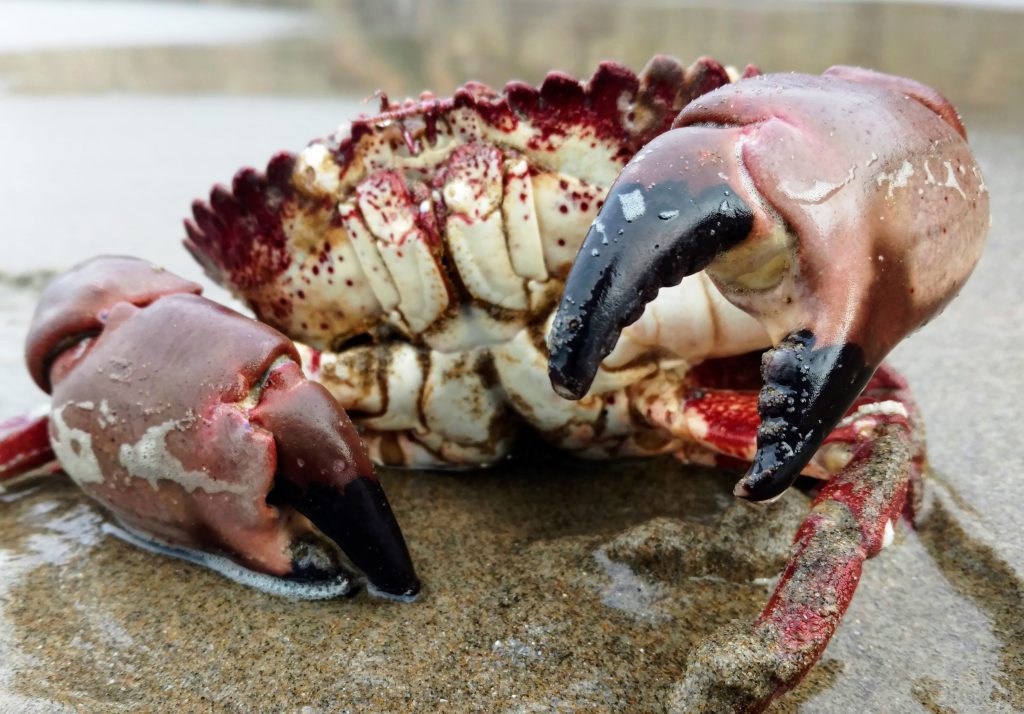 Like many crab species, rock crabs are opportunistic and eat dead material along with a range of live animals: mussels, barnacles, snails, and other crabs. The robust claws of rock crabs crush barnacle shells. Unlike the cutting pinchers of Dungeness crabs that shred neoprene gloves and rip human skin, the pinchers of rock crabs crush. These powerful levers can crack a pencil in half (I tried this after reading about it). It’s even said that rock crabs can break a human finger. Though I have yet to meet someone with a broken digit who can confirm this, I keep the power of rock crab pinchers in mind while moving kelp and probing crevices in search of creatures.

When the tide is out, rock crabs burrow in sand near rocks and seaweed to hide from gulls. A rock crab’s bone-crushing power offers little protection from agile gulls that dodge a crab’s flailing pincers. When gulls find a stranded crab, they flip the creature onto its back and pierce its belly armor with quick jabs of their bills. And a crab that a few minutes earlier may have cracked open a snail shell to eat the living animal inside is now, in turn, devoured alive.

The sound of surf instills in human visitors a sense of peace. But life in the intertidal zone for the creatures that struggle to survive in this crowded, chaotic environment is anything but calm. Perhaps the poet Alfred Tennyson had red rock crabs in mind when he penned the phrase that has come to exemplify the eternal violence of the natural world: “Nature, red in tooth and claw.”

Finding the right shell can be a matter of life and death for hermit crabs (Pagurus sp.). Empty seashells provide hard houses for soft-bodied hermit crabs, which are forced to search for larger homes each time they outgrow a shell. The supply of suitable shells is limited, leading to a crowded and often violently competitive housing market. Hermit crabs grapple like wrestlers, grabbing each other’s shells with frantic claws as they tumble through the sand, trying to oust their competitor from its house. 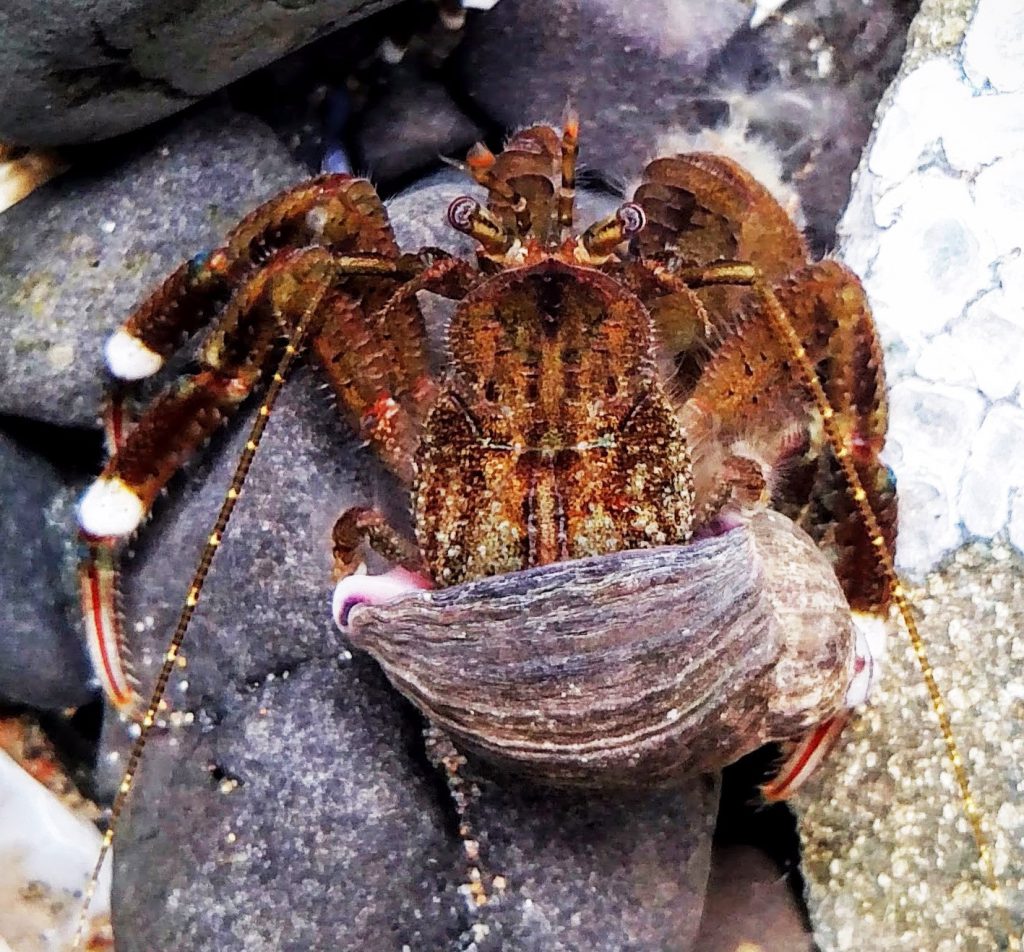 Though hermit crabs often battle each other for the best homes, they also display noteworthy forms of cooperation. Sometimes two crabs size each other up, probing and prodding each other’s shell, assessing its suitability by using their legs like calipers to measure its dimensions. But then, instead of fighting, they trade. This bloodless shell swap often benefits both parties.

Even more remarkable is hermit crab queuing behavior, which seems almost British in its politeness. When a home-hunting hermit crab comes across an abandoned shell that is too large, instead of continuing to search for the perfect shelter, the crab patiently waits by the oversized house. Other crabs soon show up. After inspecting the abandoned shell and finding it too large, the new arrivals check out each other’s shells and form an orderly line from largest crab to smallest. When a crab large enough to move into the empty shell finally arrives, the big crab’s vacated shell is snatched up by the next largest crab in line, whose vacated shell is used by the next crab in line, and so on. Hermit crab queues seem better organized than a group of humans trying to agree on a pizza order.

Some crab species also cooperate with anemones, placing these predators with their poisoned crown of tentacles on their shells for protection. In return, the anemones become more mobile than if they’re attached to rocks, and they dine on bits of food left over when their crab partners eat.

Combat often seems the rule in nature. Yet cooperation can also be an effective strategy in the battle to survive among crabs and all other creatures, including big-brained apes. The ability of our species to work together in human societies has grown from deep evolutionary roots in the animal kingdom.