Patches of barnacles blanket the rocky surfaces in and around Oregon’s marine reserves, and hide fascinating life history secrets. We’ve invited guest author, filmmaker, and photographer Stephen Grace to share some of his photos and insights on barnacles with us.

Scoured by waves and scorched by sun, the shells of gooseneck barnacles (Pollicipes polymerus) whiten in the intertidal zone. I tend to overlook these drab crustaceans that attach themselves to rocks and feed by filtering seawater. On rare occasions, however, I find gooseneck barnacles in sheltered stashes safe from direct sunlight and crashing surf, and their protected shells shine like gemstones. When I touch the jeweled shells, these relatives of crabs, lobsters, and shrimps swivel their leathery necks.

Unlike acorn barnacles (Balanus sp.) that encrust hard surfaces of the intertidal zone, gooseneck barnacles can bend their long necks back and forth. But all adult barnacles, whether acorn or gooseneck, are forever fixed in one location, head down and feet up. 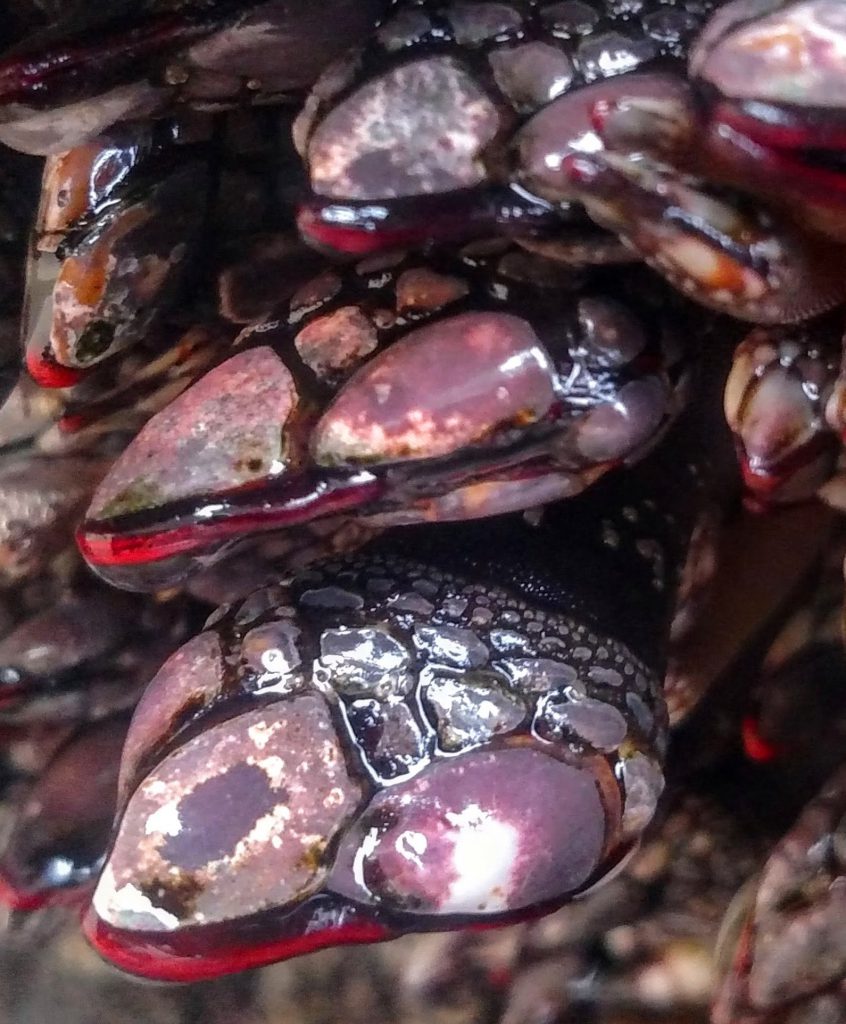 A barnacle begins its life as a larva that moves freely through the ocean. Unlike its crustacean cousins that continue their free-ranging lives, the barnacle becomes anchored in place, like a person who sows his wild oats and then settles down. How a barnacle settles is remarkable. It glues its head to a hard surface with a cement so strong it has inspired dental surgery adhesives. The creature’s feet metamorphose into feathery feeding appendages known as cirri. When submerged, a barnacle uses its cirri to comb the water, capturing plankton and tiny bits of dead matter.

The barnacle’s strategy of living on its head and eating with its feet allows it to survive predation by fish and other creatures. Barnacle cirri that are eaten can grow back; if the animal poked its head out of its shell instead of its feet, it would be killed.

After attaching itself to a hard surface, a barnacle builds a shell fortress it never leaves, becoming a prisoner in a calcareous castle. Though a barnacle has a hard exoskeleton like other crustaceans, its shell (or “test” as scientists prefer) provides extra protection from both predators and the elements. When the tide recedes, a barnacle pulls its cirri inside and closes up its shell with plates that shut like a trapdoor, shielding the creature from dry air and sealing in moisture. To prevent its body from drying out, a barnacle circulates the seawater stored within its shell, creating the crackling and popping sounds heard in sea caves and around rock walls when the tide is out.

Like all other crustaceans, a barnacle molts as it grows. Though its shell remains anchored in place, its body inside the shell sheds its exoskeleton. Barnacle molts that wash up in the driftline or sink to the bottom of tidepools look like reddish-amber shrimp.

Acorn barnacles anchor their shells directly to rocks or other hard surfaces. Gooseneck barnacles attach themselves to hard surfaces with peduncles—the flexible stalks that give the creatures their snakelike appearance. Peduncles allow gooseneck barnacles to aim their cirri into current when they feed. The pelagic gooseneck barnacle (Lepas anatifera), a species that attaches to logs and other flotsam that washes ashore, swivels its neck. Clusters of the stranded creatures sway back and forth, as if searching for the sea.

Adult barnacles secrete compounds that attract larvae, creating densely populated clusters. Living packed together in groups allows barnacles to fertilize each other’s eggs internally. Relative to their body size, barnacles have the largest penises of any animal—and every barnacle has a penis.

Barnacles are hermaphroditic: each creature has both male and female sex organs. A barnacle reaches over to inseminate its neighbor, using a penis that inflates up to eight times the length of its body—a different strategy from the method used by mussels. Like barnacles, mussels anchor themselves to hard surfaces and can’t move around to find a mate. Mussels, however, reproduce by broadcasting their eggs and sperm into the water to mix.

Scientists recently discovered that barnacles can change the size and shape of their penis to best suit the water conditions. Long, thin penises perform best in calm water; short, stout penises are optimal in turbulent seas. Less salacious but equally fascinating is the idea of barnacles as parents: they brood their fertilized eggs within their shells. Charles Darwin was so fascinated by barnacle reproduction that he studied the creatures on a daily basis for eight years before publishing his groundbreaking book On the Origin of Species.