The past few weeks of SMURFing at Redfish Rocks have been nothing if not eventful. With all of the lost SMURFs and moorings, it’s almost as if there’s been a curse on the SMURFs. Thankfully, though there are signs that the SMURse is lifting (knock on wood!). After a month of issues, all eight SMURFs were successfully sampled this week for the first time since June 19th! The collection this week included 2 cabezon, 1 snailfish, and 4 QGBCs. These were the first QGBCs collected from Redfish Rocks since May. Could they herald the coming of a pulse? Only time will tell. Though the end of the SMURF season is on the horizon, there still is plenty of time for our late-summer-settlers to come in. Years of research have taught us that recruitment is highly variable. The Redfish Rocks QGBC pulse has come as early as mid-July in 2015, or as late as mid-September in 2016.

What’s in a SMURF?

Though the SMURF team still eagerly waits for an upcoming pulse, we can’t help but feel a bit of relief after this week. Building and deploying a SMURF is no easy task. Doing it over and over again to replace lost SMURFs and moorings takes a lot of work. So how does one make a SMURF? The materials are simpler than you might imagine. 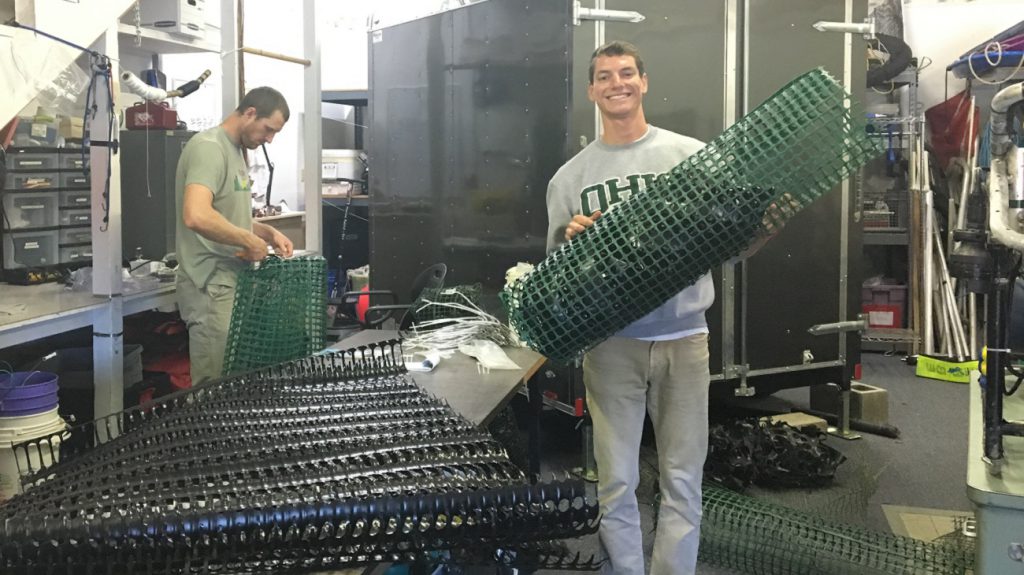 A SMURF itself is nothing more than plastic fencing folded into a cylinder, stuffed with plastic snow fencing, and fastened together with a boatload of zip ties. Attaching it to its mooring requires some plastic tubing and halibut clips, but overall, the SMURF design is quite simple. More complicated is actually the design of the mooring itself. To ensure that SMURFs don’t drift away and remain one meter below the surface, a complex array of ropes, crablines, shackles, fancy knots, and buoys are employed. At the base of all of this is a 150 pound anchor made from recycled ship anchor chain to hold the whole thing in place.

Deploying this apparatus is sometimes accomplished with the help of our fisherman collaborators who can use commercial pot haulers to release the mooring over the side of their boats. Once in the water, the SMURFs are at the mercy of Mother Nature! The ocean is extremely powerful and can undo the best laid plans of SMURFers and men, as we have seen. Thankfully, all of our SMURFs are once again in action and hopefully will remain that way through the end of the season!

Keep checking back on the SMURF blog for more information about how the SMURFs are faring! Every new week could be the one that finally brings the big pulse, don’t miss it!