Earlier this week, our intrepid team of SMURFers went out on the Oregon Coast Aquarium’s boat RV Gracie Lynn. The collection returned 3 clingfish, 2 QGBCs, 1 OYTB, and 3 Cabezon (as a reminder, OYTB and QGBC are abbreviations for groupings of rockfish species that are difficult to distinguish as juveniles). As an added bonus, this week, for the first time ever, part of our SMURFing expedition was streamed live on Facebook! You can watch the collection of one of the SMURFs in the video below. The video comes complete with commentary on the science of SMURFing as well as answers to some important SMURF questions, so check it out! Though only 9 fish were collected, they came from four species groups, making it a fairly diverse day of sampling. OYTBs remain the most collected fish in the SMURFs at Otter Rock so far this season. However, a pulse from one of our late-season-settlers could change that completely. 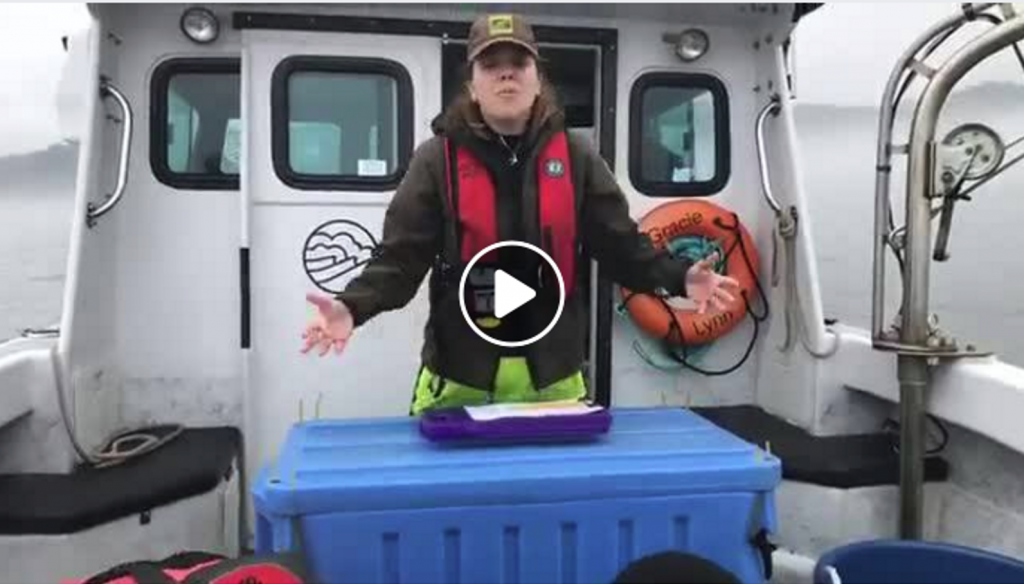 The Sultan of SMURF

One of those typically late-season-settlers which was absent from our collection this week, has also been one of the most commonly collected species in past years. You’ve heard of Babe Ruth, the so-called Sultan of Swat. Well our very own Sultan of SMURF knocks it out of the park with its historically high collection numbers. Unlike last week’s Cabezon, though, this species is not present in every sample. Some weeks, it appears in massive numbers! But most weeks it is completely absent. You might say this species is a little two-faced, a description which hits it right on the nose. That’s right one of the species that may be swamping the SMURFs soon is none other than the Splitnose Rockfish.

The adult Splitnose Rockfish reaches a maximum length of 18 inches and is identifiable by the notch in its upper jaw, which also gives the fish its name. The purpose of this adaptation is unclear, but may have something to do with their diet. Splitnose primarily eat crustaceans in the midwater and above the ocean floor. As adults these fish are deep-dwellers normally residing between 500 and 1500 feet, and ranging as deep as 2600 feet! Like many other fish species, Splitnose spend their larval stage drifting in the ocean before reaching juvenile size. These juveniles often form large schools around floating mats of kelp, or around our SMURFs! Redbanded Rockfish also have been found to congregate around kelp mats as juveniles, and both are often found in the same SMURF sample. Since the two are nearly indistinguishable as juveniles, we treat them collectively as the SR species grouping. The huge pulses of SRs we have seen demonstrate the success of the SMURFs in imitating suitable habitat for juvenile fish.

Though SRs have been collected in huge numbers, they are anything but consistent. SRs have only been collected on about 25% of the SMURF trips. They are also late settlers, never collected in the SMURFS before July 1st. The tale of the Splitnose is one of booms and busts. In 2014 at Redfish Rocks, not a single SR was collected all season. The following year at the same site, nearly 900 were caught! The late peaks of the SRs are explained by their reproductive timing. The boom and bust pattern of their settlement is more complicated, but probably hinges on oceanographic conditions which can vary from year to year. So far in 2017 we have not collected any SRs. That could change, though. More than 80% of the SR specimens have been collected after August 11th, the day this story was posted, so stay tuned!

Keep checking back here for more awesome SMURFing information. When will the midsummer lull end? Are we in for a huge pulse of SRs? All these questions and more will be answered in the upcoming weeks!

Love, Milton S. Certainly More Than You Want to Know About the Fishes of the Pacific Coast: A Postmodern Experience. Really Big Press, 2011.