Summer surveys have started for everyone’s favorite echinoderm – the sea star. That’s right, the height of summer has brought some of the lowest tides of the year – perfect for intertidal sea star surveys.

So why do we monitor sea stars in Oregon’s reserves? Two reasons. One, they are a keystone species which means they play a large role in defining rocky intertidal ecosystems. Without them the types of animals and seaweeds that dominate our rocky shores would look dramatically different. Two, we’re working to help understand if and how sea stars are recovering after the massive Sea Star Wasting Disease outbreak that occurred along much of the West Coast of North America.

By monitoring sea stars in marine reserves we can understand how populations are faring and how rocky shores along our coast may appear in the future.

When most people think of voracious predators, the first animals that typically come to mind are the classics: lions, bears, sharks, etc. But despite their harmless-looking geometric appearance, these feisty echinoderms earn the title of lions of the intertidal zone here in Oregon. By hunting mussels and other organisms, Ochre Sea Stars act as a keystone species maintaining a balance between various invertebrates and seaweeds in intertidal and subtidal ecosystems. Without them certain species — such as mussels — may start to dominate, crowding out kelp and other substrate-dependent organisms.

Whereas a lion uses speed and strength when hunting, a sea star’s hunting method is much less conventional. Using tube feet – lots of small tube-like projections on their underside — that are powered by their water vascular system, sea stars can pry open the mussel’s shell just enough to then turn their stomachs inside out and insert their stomach into the mussel, secrete digestive juices, and consume the mussel from the inside out. Sounds like it could be something out of a science fiction movie. 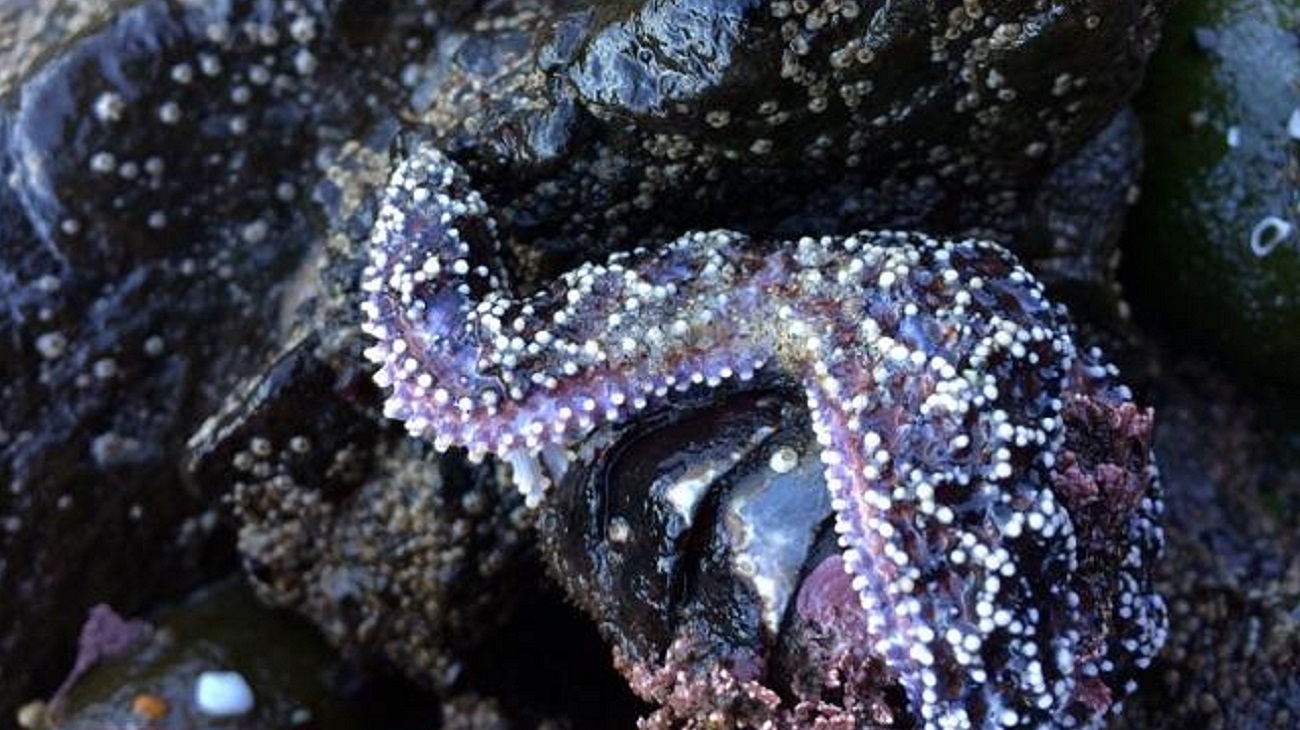 Check out this Ochre Sea Star preying on an armored Chiton — a type of mollusc — at the Cascade Head Marine Reserve.

These crucial predators are currently at risk. In 2014, an epidemic known as Sea Star Wasting Disease (SSWD) came to the Oregon coast. Sea star wasting disease causes lesions and decaying of the sea star’s body, and can ultimately result in death.

There have been recorded outbreaks of SSWD dating back to the 1970s, but nothing of the magnitude we saw during this most recent episode. Past outbreaks have usually occurred across small regions and over short time periods, so the consequences were relatively localized. This outbreak has been much bigger. It began in 2013, in California and travelled north — skipping Oregon at first — and arriving in Washington, Canada, and Alaska. Then in 2014, the symptoms were observed here in Oregon. The initial severity of SSWD in Oregon was high, with prevalence amongst sea stars climbing to over 80% in the summer of 2014. This led to declines in the density of sea stars, with losses up to 90% at some rocky shore sites (Menge 2016). Prevalence of the disease has greatly declined since, but it is still uncertain if or to what degree the sea star population will recover.

Looming questions researchers are trying to answer include: Will sea stars recover? What do rocky intertidal communities look like in the absence of this keystone animal? Will other environmental stressors, such as ocean acidification, impact sea star recovery?

A number of sea star species inhabit our rocky shores including the Blood Star, Sun Star, and False Ochre Star. The most abundant — and a keystone species — is the Ochre Sea Star.

The ODFW Marine Reserves Program has partnered with two of the largest rocky intertidal monitoring programs on the West Coast of North America. For over 20 years, the Partnership for Interdisciplinary Studies of Coastal Oceans (PISCO) and the Multi-Agency Rocky Intertidal Network (MARINe) have been collecting long-term, rocky shores data along the West Coast — including parts of Oregon. ODFW contributes by sending teams into the field to survey sea stars at the Otter Rock and Cascade Head marine reserves.

These surveys are back in action this summer. The surveys consist of belt transects where researchers meticulously comb a 5 m x 2 m area of rocky intertidal habitat for any and all sea stars. They also conduct timed searches where researchers randomly walk throughout the rocky intertidal zone observing and measuring any sea stars they encounter along the way. All of the data are shared with PISCO and MARINe to be incorporated into their larger, coast-wide data sets.

What We Saw In Our June Surveys 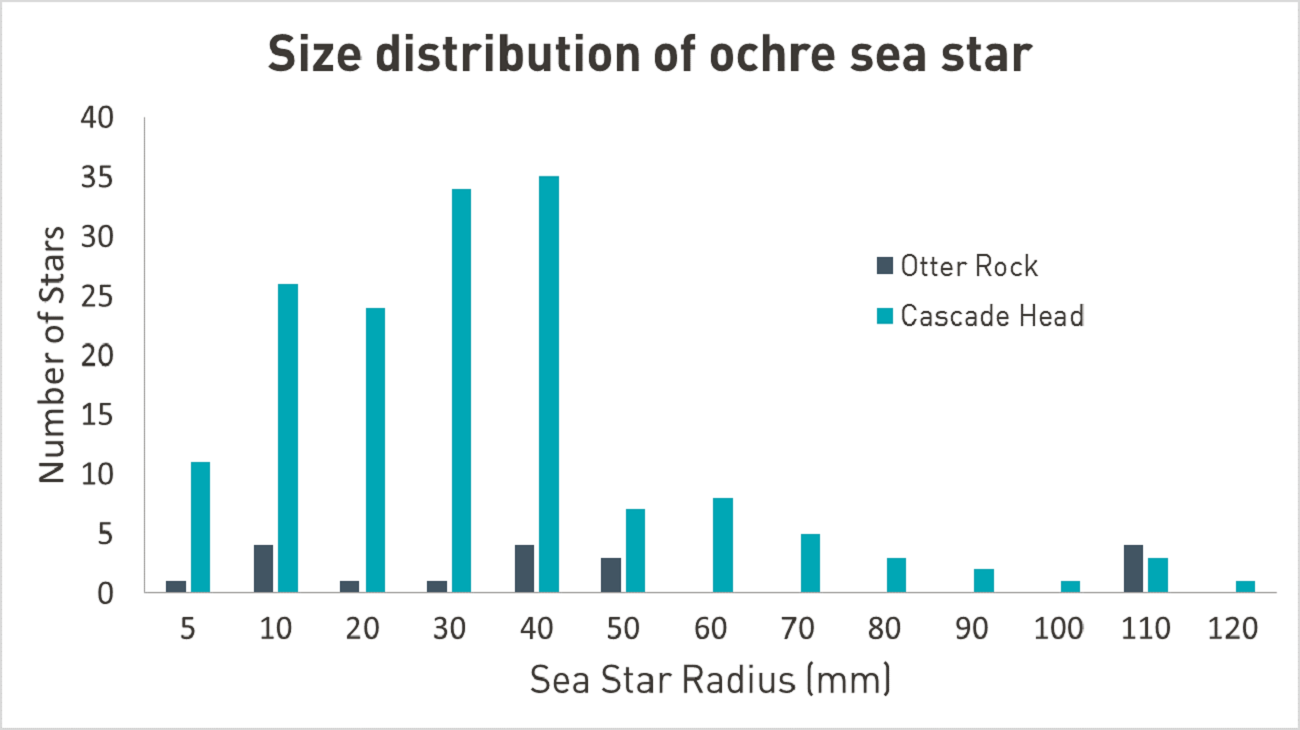 The most abundant species we observed in our June surveys this year, at both the Otter Rock and Cascade Head reserves, was the Ochre Sea Star (Pisaster ochraceus). This species has an average arm radius of about 90 mm (Harley et al 2006) and can reach over 200 mm. However, the above figure shows that the stars we found while conducting our belt transects rarely reached this average size.

While SSWD prevalence was low – observed in 6% of the stars at Otter Rock, and 0% at Cascade Head — this could potentially be because larger individuals are the most susceptible to the disease.

The greater number of small sea stars could show that, although many larger stars died in the epidemic, young stars are on the rise and hopefully will survive to grow into adults. More monitoring and research will be needed to better understand the recovery of the stars, and implications of SSWD in Oregon’s marine reserve sites.