In 2014, the Pacific Coast of North America was hit by a mysterious epidemic that wiped out millions of sea stars, marking the largest marine animal disease event in recorded history. The disease caused these organisms to physically waste-away — hence its name; sea star wasting disease. Sea star wasting disease has had a large effect on many sea star species along the west coast of the United States. This disease causes lesions and decaying of the sea star body, and often results in death. 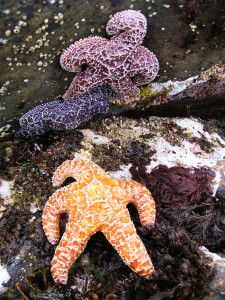 Many species of sea stars in both intertidal and subtidal areas off of the Oregon Coast are dying due to a recent disease outbreak. Because of an increase in disease, the Oregon Department of Fish and Wildlife is helping to monitor rocky intertidal and subtidal areas starting this summer. On July 2nd, a team from ODFW’s Marine Reserves Program went out to Otter Rock Marine Reserve and completed two different surveys on the density and disease severity of sea stars in the area. The same surveys were completed at Cascade Head Marine Reserve on July 6th. This effort will help to monitor the long term effects on sea star species and to understand the distribution of the disease along the Oregon coast.